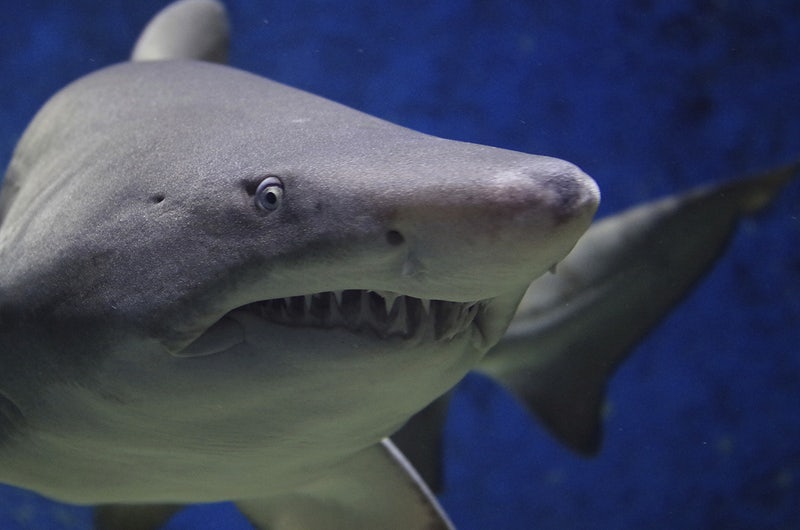 Sharks are unique creatures that have always fascinated marine biologists and the general public. Sharks have many features that are different and unique to most other fish and animals. Keeping aside the intelligence of sharks, there are several other things to be looked at. These include the unique physical features that enable the Elasmobranch to live and hunt as it does in the ocean. One of these is the smooth-looking skin of sharks.

The skin of sharks is one of the most interesting physical parts that helps the fish in all spheres of its life without its own conscious control.

As with all animals, sharks have adapted their skin to their habits and to the habitat in which they live. The seemingly smooth skin of the sharks displays an ingenious design suited to their aquatic and hunting lifestyle. Let’s take a closer look at shark skin and why it is smooth.

As much as a good look at a shark’s skin might convince you, they don’t actually have smooth skin. Shark skin is extremely rough. Most sharks have a central pulp cavity on their outer body along with the dentine and outermost layer of enamel. These layers protect the skin of the fish against any injury, deeming it hard and very rough as a result. Sharks can have thick layers of skin due to this fact. The Whale Shark has a skin of 10 centimeters.

Despite the silky and smooth appearance of the skin, it actually feels like sandpaper. Shark skin has flat v-shaped scales known as dermal denticles. These denticles are made up of apatite, a hard crystalline mineral embedded in collagen. The microstructural rigidity makes the denticles as strong as steel and as hard as granite. This is the reason why small fishes, and even humans, when coming in contact with shark skin, can be injured.

The spines of these denticles are pointed from the mouth to the tail, so you can feel the rough scales when moving towards the head from the tail. These denticles are arranged in a mosaic pattern throughout the skin of the shark, acting as a helix. This helix acts as a supportive corset for the shark’s body and internal structures. The muscles of the shark are directly attached to the inside of this helix.

How do sharks benefit from scaly skin?

One of the major benefits of having scaly skin made up of denticles is that sharks do not have to overcome much friction when they are swimming. As mentioned above, the scales are pointed towards the tail. Suppose you move your hand from the head to the tail; it would feel smooth in this case. However, if you move your hand from the tail to the head, it would be extremely rough and sandpaper-like. Similarly, the friction is reduced in water when the shark is swimming.

In order to support the heavy body of the sharks, there must be something tactile present. The skin acts as the tactile organ supporting the body with its microscopic dermal denticles. Moreover, it is easier for sharks to retain heat in their body in order to stay at an optimum temperature. In the case of softer skin, it would be difficult to maintain the temperature best suited for the needs of the shark.

Moreover, sharks can easily prowl along with the rocky and sharp bodies of reefs in the water. Their scaly skin helps them prevent any damage either to the internal organs or the skin itself. The hard leathery skin, in order words, protects them from anything that might harm them physically.

The placoid microscopic scales, i.e., dermal denticles, also decrease the drag in the water. Lastly, it makes it harder for other predators to eat sharks. Because the skin isn’t easily damaged, they have a greater chance of escaping or attacking back if they have an encounter with a predator.

Shark skin can be used as sandpaper by humans. If treated, even luxury leather is made out of shark skin. Moreover, shark skin leather products are then further used to make jackets, shoes, and bags. After knowing how the dermal denticles decrease turbulence and drag, Olympic swimsuit designers have taken inspiration from these placoid scales.

Shark skin, when first glanced at, looks smooth. Even the sharkskin fabric is “inspired” by the extremely smooth-looking outer surface of the actual shark skin. However, the reality is a little different. The scaly skin of the sharks yields a lot of benefits for the shark. When discussing the way sharks live and hunt, their skin typically makes a huge difference, and in this article, we have seen why.