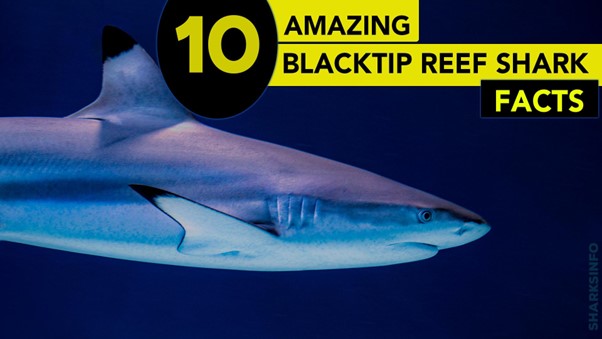 The blacktip reef shark, known for its unusual look, is frequently seen spinning out of the water, either to grab prey or just for fun. The blacktip reef shark, a member of the Chondrichthyes class, is frequently seen swimming in shallow waters, and some snorkelers have seen these sharks on their adventures. Let’s go deeper into the lives of these sharks.

Blacktip sharks are known for their exceptional olfactory senses, which allow them to smell the flesh of fish in the 10 billion parts of the water.

Unlike other sharks, blacktip reef sharks reproduce using the Viviparous mode, in which the offspring develop within their bodies. After giving birth, the mothers place the pups in nurseries in shallow water, where they are safe from predators. The blacktip reef shark’s breeding season lasts from November to March. Before giving birth, the female retains the young one inside herself for about a year.

A blacktip can grow to be around 7 feet long, but the usual length is a little more than 5 feet. Its maximum weight is approximately 30 pounds. Baby blacktip reef sharks range in size from 16 to 20 inches. We don’t know how fast a blacktip reef shark can swim, but we do know it’s a fast-swimming, active shark.

These sharks, as the name implies, dwell in shallow reef waters and can be found along the coasts of Japan, Thailand, Northern Australia, South Africa, and New Caledonia. They do not dive deeper than 20 meters and prefer warm water over cold water.

Blacktip reef sharks are carnivores that eat fish, mollusks, cephalopods, and crustaceans. Sardines, surgeonfish, herring, mullet, menhaden, and anchovies are among the fish they attack. According to some tales, they also eat seabirds and sea snakes.

Being timid and shy, they rarely pose a threat to humans; no blacktip reef shark has ever been killed on record. Their bashful nature makes it difficult to approach them while scuba diving.

The threats and dangers posed to the Blacktip reef shark have been causing a decline in its number, thus, the IUCN has placed it on the red list as a Vulnerable species.

Blacktip reef sharks are very shy by nature, that’s why it is hard to swim with them as they do not like human presence around them.

Blacktip Sharks are occasionally seen above water. They leap to the surface, whirl around many times, and land on their backs. This is how they are said to catch their victims. This is one of the reasons they are frequently confused with Spinner Sharks, as they display similar activity and share other morphological characteristics.

Blacktip reef sharks have blacktips on their pectoral and dorsal fins, swim in shallow waters, and feed on schools of fish. They are not aggressive predators, and they do not attack humans unless they are provoked. Human activities, however, are causing a fall in their number, which must be addressed.