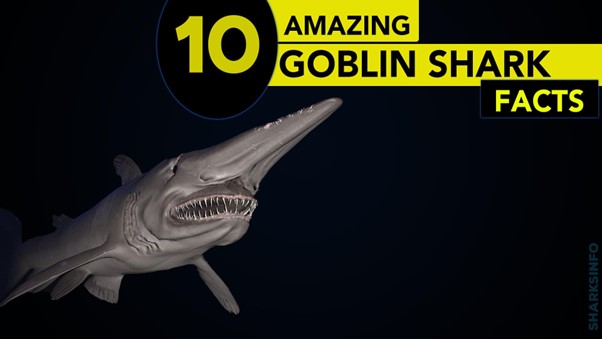 Here are some interesting facts about goblin sharks.

Pink was probably not one of the colors you’d associate with a goblin. However, this color is derived from a feature that is more like a fabled demon from the Middle Ages. Goblin sharks have wrinkled, translucent skin, and their blood gives them a murky, pink, or purplish-grey hue.

Goblin sharks often reside on the ocean’s floor, at depths ranging from 40 to 1,300 meters. They are slow swimmers and bottom dwellers who prefer warm mid-water to survive. They inhabit seamounts and continental shelves. Furthermore, they are rarely seen along the shoreline, therefore they have never been filmed. However, a few small specimens have been spotted near the coast.

Because of their deep-sea environment, Goblin sharks’ reproductive behavior has received little attention in comparison to other shark species. However, it is thought that sharks reproduce by an ovoviviparous form of reproduction. Sharks reach maturity at the age of 16 and can live for up to 60 years.

The Goblin Shark is also known as the Vampire Shark as if it wasn’t already frightening. It is dubbed a vampire because it lives deep in the sea, away from light. Goblin Sharks have been discovered at depths ranging from 270 to 1300 meters (890 ft to 4300 ft). Vampires avoid sunlight by resting in coffins, but sharks simply move to waters so deep that there is hardly any light.

7: Name Is Of Japanese Origin

Mitsukurina owstoni is the scientific name for the Goblin Shark. Because the first specimen was discovered in 1898 off the coast of Japan by a naturalist named Alan Owston. He had no idea what it was and handed it on to a Japanese scientist, Kakichi Mitsuriki.

When the shark was discovered, it was named after these two individuals. However, the name Goblin Shark is also a literal translation of its Japanese name, tengu-zame. A Tengu is a half-man, half-bird creature with red skin and a large nose in Japanese folklore, therefore the name suits.

Goblin sharks are able to open their mouths quite wide, almost reaching to 111-degree angle. The Goblin Shark’s strange-looking jaw can stretch forward to catch passing prey. Because the shark is slow and awkward, it cannot hunt down prey and must instead wait for prey to approach it. It snaps its jaw forward to catch the victim when it is close enough. The jaw has small sharp teeth in the front for grasping fish and flatter teeth in the back for grinding up mollusks.

The strategy for goblin sharks to hunt is to approach prey quietly in the dark and lunge at it with open jaws. According to research, the jaws can lock down under pressure in a retracted position, accumulating elastic energy in particular ligaments that can be released to rocket the mouth forward, surrounding the prey.

The Goblin Shark is frequently regarded as rare. It is unusual for people to come across sharks. Because it has been impossible to keep the shark alive in captivity thus far, and because it lives in deep water, understanding of the shark is limited. As a result, it is probably more appropriate to say that the shark is rarely spotted and that we know very little about it.

Goblin sharks, often known as living fossils, have been found in the open ocean for around 125 million years. The species is found all around the world, however, they prefer to live deep in the water, typically at depths ranging from 40 to 1200 meters. Though the species is classified as Least Concern, it has gained attention due to its distinctive pink-colored skin, elongated snout, parabolic mouth, and pointed nose.