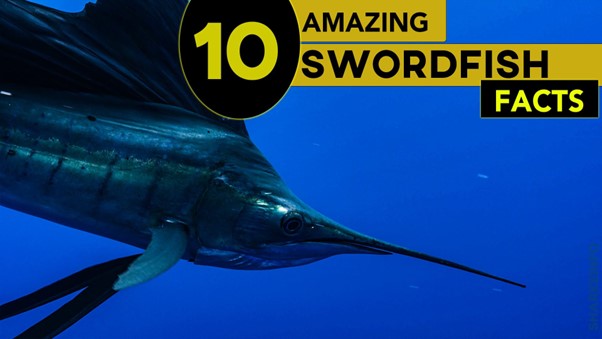 One of the most prevalent species in the ocean is the North Atlantic Swordfish, often known as the broadbill, which may be seen jumping out of the water with its long bills in search of prey. The swordfish, with its stunning size and appearance, is likely to leave an impression on everyone’s mind.

Let’s have a look at some of the interesting facts about swordfish.

Swordfish, also known as Xiphias gladius, have long, flat bills. Their upper body color ranges from black to deep brown, while the underside is usually white. They are frequently silver or grey in color.

The bodies of swordfish are rounded, with long, flattened snouts and large eyes. Their dorsal fin resembles the tail of a shark and a feather. They lack teeth and pelvic fins. The pectoral fins have a distinct shape. With a peak speed of 97km/h, their sleeker and rounder bodies make them agile predators and excellent swimmers.

Swordfish, interestingly, do not rip their prey with their bills, but rather slash at them to shock them. Swordfish dismembers stun the victim with a slash and swallow the smaller parts of that prey.

Swordfish are oviparous, with females capable of laying 1,000,000 to 30,000,000 eggs at once. Broadcast spawning occurs when the female releases her eggs into the water and the male releases his sperm to fertilize the egg, resulting in the birth of juvenile swordfish. They reach maturity at the age of 4-5 years, and their females are significantly larger than the males.

A Swordfish’s lifespan is estimated to be 15 years.

Swordfish are among the fastest and most powerful fish in the ocean. When hooked, these sport fish have been reported to plunge so quickly and viciously that their blades hit the ocean floor.

5: Secretion of Oils From Heads

Near the base of the rostrum, swordfish have a unique hydrophobic oil-producing organ. These oils are released from pores on the front of the skull and are intended to generate a highly hydrophobic coating over the skin, reducing drag during high-speed pursuits.

Interestingly, young swordfish have teeth, but they disappear as they grow; by the time they reach adulthood, the upper jaw is sharp and blade-like.

Swordfish have dark dorsal and light ventral pigmentation, which allows them to blend in when viewed from above or below. They also feature skin microstructures that selectively reflect and scatter polarised light, making them even more difficult to detect for their prey.

Swordfish are ectothermic, which means their internal body temperature is regulated by exterior heating processes. These animals, on the other hand, have unique organs just next to their eyes that warm both their eyes and brains. The ability to heat their eyeballs increase their vision and, as a result, their ability to hunt.

The population of Swordfish is continuously decreasing and due to this alarming situation, the IUCN has placed it as Near Threatened on its red list.

Swordfish are parasitized by over 50 distinct species. Copepods, tapeworms, and roundworms are among them, but swordfish is also home to remoras, lampreys, and even cookie-cutter sharks.

The swordfish is a member of the Xiphidae family and has spherical bodies with long and flat snouts used to stun their prey. They are visually pleasing and have flavorful meat, therefore they are captured in large quantities to meet commercial needs. Conservation initiatives are being considered to prevent the species from going extinct.