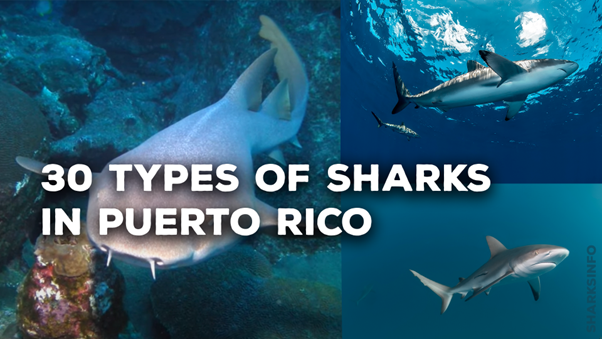 Puerto Rica is a perfect destination place to visit throughout the year because of its natural beauty and number of beaches which attract the visitors the most. It is an Island located in the mid of the Atlantic Ocean the and Caribbean Sea where you can encounter many species of sharks. The reason for the existence of many species of sharks there is the favorable water temperature and the availability of excess. In this article, we are going to take a deep dive and explore about 30 different types of sharks sighted in Puerto Rica.

30 Types Of Sharks In Puerto Rico

In the 300 miles-extended coastline of Puerto Rico, many species of shark are spotted wandering in the open waters. Out of which, 30 most sighted species are listed below:

Tiger sharks are spotted usually at the depth of 1,500 to 3,000 feet near the coastline in the low waters. These species can reach up to 16 feet and are not very picky about their food, they eat almost everything they find such as seals, lobsters, birds, sea snakes, and fish.

The Hammerhead sharks are mostly spotted in the coral reefs, lagoons, terraces, continental shelves, or near the water surface at the depth of 260 feet. The species can reach a maximum length of 15 to 20 feet and feeds on octopuses, squids, stingrays, and shellfish.

The most aggressive species of sharks that are found in the open waters of Puerto Rico are Bull sharks. These species are known to attack humans either out of curiosity or by accident. Each year there are 22 fatal attacks of Bull sharks recorded over the globe. The people mostly get attacked by Bull sharks because they usually thrive near the water surface at the depth of only 100 feet.

Reef sharks are mostly spotted in the Caribbean Sea but can also visit Puerto Rico waters. They are occasionally seen near the surface not more than 100 feet deep but they are capable of taking a deep dive of 1,000 feet as well. They mostly enjoy cow fishes, butter fishes, and crustaceans as their primary food.

The 20 feet long creatures of sharks are sighted at the depth of 4,500 to 6,000 feet. The Six gills sharks are easy to distinguish as they have 6 pairs of gills which help them in breathing. The species often visit the coastline in the search of food such as crustaceans, dolphins, corals, crabs, cod, conches, and flounders.

Though they are not the dangerous type of sharks but are seen near the shoreline at the depth of only 80 feet. They are capable of having a deep dive of 1,660 feet as well. They have unique sensory receptors located on the head which help them to spot the prey buried in the sand. Scalloped Hammerhead shark includes herring, squids, mackerel, and octopuses as their main food item.

The Nurse sharks are seen near the water surface of Puerto Rico at the depth of just 40 feet. These species are bottom dwellers that are found resting near the floor of the ocean, become active in the night hour and come closer to the shoreline. They can reach up to 10 to 15 feet and have a life expectancy of 25 to 30 years.

The White Tip sharks are the common species of warm waters of the tropical regions which is why Puerto Rico is a favorite habitat of these sharks. These 7 feet long creatures thrive at the depth of 131 feet and include squids, rays, sharks, and tuna on their menu.

Interestingly, the Cat sharks can grow to a maximum length of 2 feet and are only 3 pounds in weight. Though they are smaller in size there are many recorded cases of their attacks, and all of them are unprovoked. Usually, these species feed on animals that are larger such as octopuses, crabs, or squids.

Silky sharks are known for their smooth and silky skin. They can grow to a maximum length of 12 feet and are spotted at the depth of 660 to 1,600 feet. Further, the species rarely visit the shoreline which is why they do not pose any danger to humans.

As the name indicates, these sharks are spotted in the reef regions of Puerto Rico. They can grow to a maximum length of 5 feet and are 30 pounds weigh. These species can easily be distinguished from the other sharks as they have black fins tip. They are quite an aggressive species of sharks and mostly attack the legs and arms of swimmers.

The most fearsome species of shark is the Whale shark as it can grow to a length of 72 feet. These species have incredibly large dorsal fins which give them an enormous appearance. Though these sharks rarely attack humans,  swimmers can only get injured by their large fins.

The most fascinating and bloodthirsty species of shark is Great White Shark which is known to attack humans during their interaction. They are not very common among the Puerto Rico waters, because they prefer cool water habitat over warm water but are rarely seen there.

The Megamouth Shark is a deep-water shark that cannot visit the shoreline as they feel threatened by humans. They are rarely spotted in the extended oceans and are filter feeds and prefer krill as their primary food source.

Gulper Shark is a member of the dogfish family and is a deep-sea shark that is hardly seen near the coastline. These species are only 5 feet in length and feed on small food items which they find near the floor of the ocean.

Other than that, some of the species have also been sighted in Puerto Rico which are listed below:

Puerto Rico is an Island located between the Atlantic Ocean and the Caribbean Sea which is why the Island is the hometown of many species of sharks. Most of the sharks occasionally visit Puerto Rico to enjoy the warm water habitat. 30 different types of sharks that are seen in the open waters are discussed in the article that has been sighted in the Puerto Rico waters. So be careful while diving, swimming, or surfing, you may encounter a shark there.