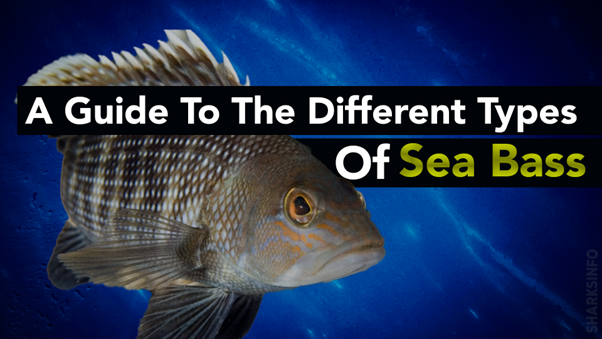 Sea Bass is a term used for the remarkable category of fish living in the oceanic world. Interestingly, most of the species belong to the family Serranidae. Overall, the family comprises approximately 475 species, many of which are popular among the fisheries for food or sports purposes. These fishes have a unique appearance as they have elongated bodies extended to about 6 feet long and weigh 500 pounds, have small scales, large mouths, and rounded tails. These species are mostly carnivorous and are active swimmers. Scroll down!

A Guide To The Different Types Of Sea Bass

As the family compromise of hundreds of fishes, we are going to explain in detail a few of the common species of the group below.

The largemouth bass is one of the popular members of the family for having dark black colored stripes throughout their body against the off-white, green, and brown coloration that can reach up to 15.7 inches, have extended mouths, and feed on small birds, fishes, and insects. They are popular among the fisheries for their tasty meat and being knowledgeable and skillful fish, these features make them fantastic game fish.

It is one of the most aggressive fish of the family as it is always ready to pick up a fight with other members or mates. They are found living in rivers, ponds, and canals on the rocky and sandy bottoms. The smaller and thinner type of body, have a mouth that extends back towards the eyes and has strong dorsal fins which allow them to swim against the strong water current. Approximately, they are 6 inches and weigh 6 pounds.

These species are found living in the warm and shallow waters of the Eastern coast of North America. They are usually small in size and have black scales all over the body – which gives a fish its name. The Black Seabass is dark grey from the top and light grey from the underside. On average, they have a mature length of 1 foot and weigh around 9 pounds. As they are carnivorous species, they include shrimps, small fishes, worms, clams, and crabs in their diet.

The unique colorations of the fish give it the name White seabass – they are silvery white-colored and have 4 to 7 vertical stripes on the side of the body. These species prefer transparent water bodies and thrive on sandy and rocky bottoms. These species can have an approximate length of 10 to 15 inches and are only 1 pound heavy. Interestingly, during the mating season, the fish travel a long distance to find their mate.

These species are commonly found in the shallow zones of the St. Lawrence River and are also sighted in the Gulf of Mexico. They are called strippers because they have long black colored horizontal stripes which extend from head to tail. These fish have an approximate length of 5 feet and weigh around 20 pounds.

Peacock seabass are native to Orinoco and Amazon rivers as they prefer warm and clear water bodies for a living. They are named so as they have beautiful bright coloration. They are extremely aggressive fish which makes them the perfect game fish. These species rise to a length of 6 feet and are around 15 pounds in weight.

The Spotted seabass are not very popular among the fisheries because they have often been mistaken by the angler, as they have similar coloration to that of the Largemouth seabass. The only difference between the two is that the mouth of the Spotted seabass doesn’t extend toward the eyes. They prefer warm but murky waters to live in and are found in the depth of the ocean rather than near the surface.

The name of the fish originates from their habitat as they are common to the warm water of the Guadalupe River. They have greenish coloration, diamond-like patterns on the side of the body, and small spots on the belly.  The body of the Guadalupe seabass weighs only 3 pounds ad they include insects and small fishes in their diet.

These species are native to the Florida rivers and Southern Alabama rivers – the only member of the family found in this habitat. They feed on insects when they are born and eat small fishes like crayfish when they become mature. They interbreed with other species like the Alabama bass and the spotted bass, to reduce the chance of its extinction.

Seabass is a different type of small fishes which are categorized in the family Serranidae. These species are usually small in size which is why they often prefer rivers, streams, canals, ponds, and lakes to live in. They have elongated bodies extended to about 6 feet long and weigh 500 pounds. Out of 475 members, the 10 most common species of the family are discussed in this article.