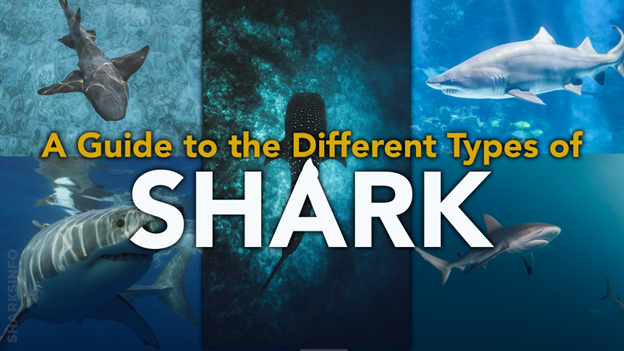 Sharks are diverse in size, shape, and type, ranging from tiny, harmless species to large, dangerous ones. Some people are scared of sharks, while others find them fascinating creatures. Regardless of the size, the reputation of being mindless killers and bloodthirsty monsters creates a current in the body when you think of encountering a shark in the ocean.

Before you make yourself a food option for the dangerous beasts, let us walk you through the guide to the different types of sharks you might encounter, and you may be able to come up with a plan to safely get closer to the species.

A Guide to different types of sharks you might encounter

Sharks can be found in all oceans of the world, and they vary in size from the small dwarf lanternshark, which is only about a few inches long, to the gigantic whale shark, which can be over 50 feet long. There are over 500 species of sharks scattered through all oceans of the world, and you never know which species you may come face to face with.

Considering the danger, it is crucial that you get an idea of the common species that you might encounter on your trip to the underwater world. So, below are a brief overview of the species of sharks that are present in large numbers and are frequently seen visiting offshore where there is more human activity.

The whale shark is the largest fish in the oceanic world, measuring up to 60 feet in length and weighing up to 21.5 tons. Despite their size and massive mouths, whale sharks are gentle giants and filter feeders, eating mostly plankton, small fish, and squid. They are found in tropical and warm waters all over the world and often swim close to the surface, making them a popular target for whale-watching tours. These docile creatures are popular among scuba divers as well, who often swim alongside them in awe of their size.

The great white shark is among the most dreaded hunters in the world. Growing up to 20 feet in length and weighing over 5,000 pounds, these massive sharks are capable of inflicting serious damage on their prey. Although they are most commonly found in the waters off the coast of California, they have been known to travel as far north as Alaska and as far south as Australia.

Great white sharks typically feed on seals, dolphins, and other large fish but have been known to attack humans on occasion. When hunting, they use their keen sense of smell to locate their prey and then employ their powerful tails to generate enough force to break through the water’s surface. Once they have attacked their prey, they use their large teeth to tear it apart.

The Nurse Shark is a species of carpet shark in the family Nurse sharks are relatively large sharks, growing to a length of 8–10.5 ft. They are brown or grey-brown in color, with a paler underside. The body is firm and cylindrical, with a long, blunt snout and small eyes. The pectoral and pelvic fins are huge and wing-like. The caudal peduncle is thick, and the tail is short and broadly rounded.

This species is found in humid and subtropical waters around the world, from the western Atlantic Ocean to the Indo-Pacific. It prefers reefs and other areas of rocky substrates, as well as seagrass beds and sandy flats.

The tiger shark is among the most terrified of predators in the ocean. It is an enormous, dominant shark that is known for its aggressive manners. It is one of the sharks that will attack humans. The tiger sharks are observed in steamy and subtropical waters worldwide. It is a top predator and is known to eat anything that it can find.

The mako shark is a bulky, predatory fish that can be present in all major oceans. These sharks can nurture to be over 12 feet long and weigh more than 1,000 pounds. Mako sharks are acknowledged for their swiftness and agility, which they use to hunt down their prey. These sharks are also known to be among the few species of sharks that will attack humans.

Bull sharks are known for their belligerent behavior and have been known to attack humans. Additionally, they can live in both saltwater and freshwater, making them one of the rare species of shark that can do so. This makes them especially dangerous to swimmers and surfers, as they can often be found in areas where people are swimming.

This species is the second-largest living fish in the world. It grows to an average length of 26 feet (8 meters), with a maximum length of 40 feet (12 meters). The basking shark is a slow-moving filter feeder that suckles on plankton. It is found in temperate and tropical waters all over the world. The basking shark is a threatened species due to overfishing and hunting.

If you’re lucky enough to encounter a shark while swimming, diving, or snorkeling, there’s a good chance it will be one of the more common, less dangerous species. However, it’s still important to be aware of the different types of sharks that exist and to know how to identify them. With this guide, you’ll be able to identify the most common types of sharks you might encounter and learn a little bit more about each one.