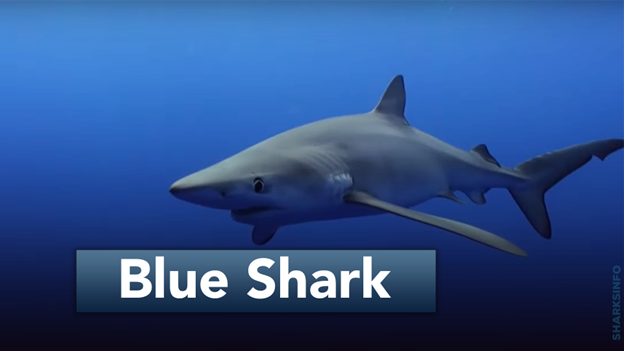 Among the hundreds of species of sharks, the blue shark is among the most widely distributed, with a presence in all temperate and tropical waters. Known to migrate long distances, blue sharks are relatively fast and agile swimmers.

With all that said, there is a lot more to learn about this fascinating species of shark. Let’s get to know about it all.

Blue sharks are apex hunters, meaning they are at the top of the food chain. These sharks play an important role in preserving the health of oceanic ecologies. Known for their boldness and inquisitiveness, the species, in scientific terms, is referred to as Prionace glauca. Also, check out the other aspects below.

Blue sharks are among the most striking and enthralling animals in the ocean. These sleek predators can grow up to 12 feet long and are distinguished by their blue-gray coloration.

Typically, blue sharks weigh between 25-55 kg in males and 92-182 kg in adult females, with a somewhat elongated and slender build.

It is a common species of requiem shark. Originating in warm, temperate, and tropical waters worldwide, blue sharks roam long distances. They typically inhabit the pelagic zone of the open ocean but can also be found in continental shelves and coastal waters. During these long migrations, blue sharks aim to find potential mates and reach areas with dense food resources.

Blue sharks are opportunistic feeders and will eat a wide variety of small to medium-sized fish, squid, and crustaceans. They have been known to attack and eat larger prey items such as seals, sea lions, and even small whales.

Smaller and younger individuals of blue sharks may be eaten by sharks larger and stronger than themselves, such as great whites and tigers sharks. The blue shark is believed to have been hunted by orcas as well.

Around 20 years of age is believed to be the average life expectancy of blue sharks.

It is fascinating to note that blue sharks travel in large groups of the same gender. Males and females spend most of the year separated; the two come together briefly during the breeding season to reproduce internally. A female matures between the ages of five and six and a male between the ages of four and five.

During mating, males may aggressively bite females, so females have thick protective skin as a preventative measure. Litters of around 100 pups are born by females who give live birth.

Blue sharks are one of the most popular sharks among commercial and recreational fisheries and are often caught as bycatch. In some areas, their populations have declined due to overfishing, and they are now considered Near Threatened by the IUCN. Conservation efforts are on the go in some countries to guard blue sharks and help rebuild their populations.

The blue shark is one of the most fine-looking and majestic creatures in the ocean. They are fast, sleek, and powerful and can be found in all the world’s oceans. Though they are often feared because of their size and reputation, they are actually agile that are fascinating to watch and learn about. These amazing creatures are an important part of the ocean ecosystem and play a vital role in keeping the ecosystem in balance.