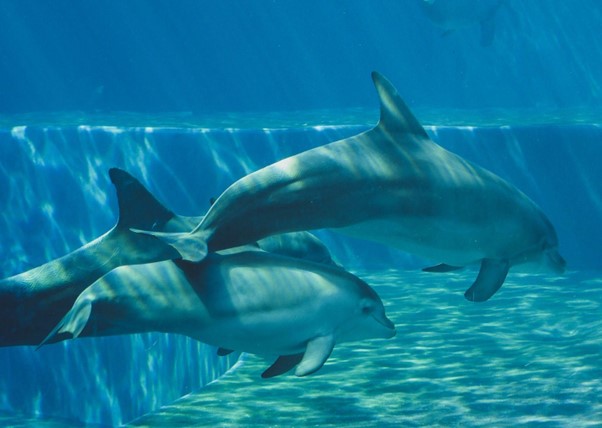 Dolphins are portrayed as the cutest and most intelligent  creatures of the oceans. They meet humans regularly. Just because dolphins have a friendly nature doesn’t mean that they are safe to interact. There are many cases reported of dolphin’s fatal attacks on humans.

Let’s explore more about the evil side of dolphins!

Despite their playful reputation, there are some reasons which demonstrate that dolphins are more dangerous than sharks. Although sharks are the top predator of the oceans, they are scared of dolphins because dolphins always attack the solitary sharks in a pod. A pod may contain 10 to 1000 of dolphins that circle around sharks and attack them from all sides, where sharks are unable to escape the battle and get severely injured.

Yes! There are many reported cases of humans being attacked by dolphins. Dolphins seem to be mysterious creatures, their friendly nature is often misinterpreted, out of aggression or disturbance they may attack you. Dolphins are no doubt social mammals but in reality they are wild creatures that should be treated with love, respect and cautions.

Warning: If dolphins try to approach you then do not interact, engage or chase them, just take a step back quickly.

We have shortlisted some of the reasons which are against the peaceful nature of dolphins and shows that dolphins are worse than sharks:

2: Dolphin’s bites are worse than sharks, dozens of cases of dolphin attacks have been reported – they pulled many humans underwater without any provocation.

3: When sharks attack humans, they just bite which is also known as a test bite and after confirmation they set them free, in contrast when dolphins attack on humans they not just bite them but also hit them hard with their snout.

4: When dolphins are starving, they always develop new methods of hunting the prey! Brainy mammal! Improving the skills of attacking! Mysterious creature! Whereas sharks are not calculated animals when it comes to hunting their prey, they use the same tactics to attack or search the prey!

6: It has also been noticed that dolphins mostly tortured the prey first then eat it! How cruel is that! Dolphins first grab the prey, then beat it up savagely and ruthlessly, throwing them here and there, breaking them into small pieces and eating them! Unbelievable! In comparison, sharks tackle the prey and swallow it either completely or in small bites! That’s it!

7: Sharks do not interact with other creatures because they prefer to live alone, they do not attack other animals except for food or to maintain the natural balance. What about dolphins? Dolphins sometimes attack other animals not for food but for fun! What – for fun? Yes! They kill their fellows by beating them with their snout and breaking their jaws and teeth! Murderers!

8:  It is quite unbelievable – researchers have revealed that sometimes dolphins kill the young ones of other dolphins. The bodies of young ones with fractured ribs, wounds, lung lacerations and the bites show that they are attacked by members of their own community. Well, no cases of shark attack on the babies have been reported yet!

10: Although it is quite difficult to keep dolphins and sharks under control, dolphins are known to act violently when kept in captivity and they beat, injure or even kill humans, whereas sharks hardly attack humans in captivity unless provoked.

Sharks have always been pictured as the monster of the ocean and dolphins are portrayed as calm, friendly and fun loving creatures. This might be true to some extent because the darker side of the dolphins has not been exposed enough. They become murderer just for fun, they attack the babies of other dolphins, they violently pursue female dolphins for mating and they attack humans by hitting them hardly with snout! They are still very loveable mammals but they have an evil side that few of us know about!