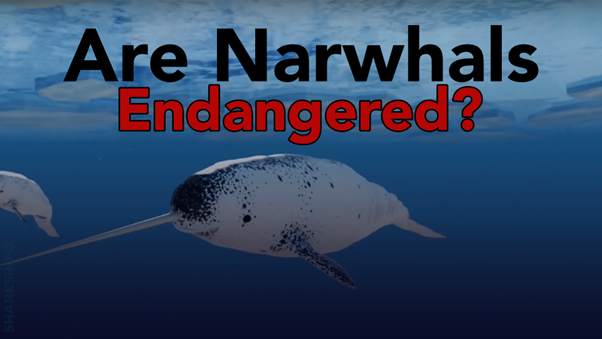 Corpses of drowned sailors. – the unicorn of the open water!

Scientifically, Narwhals are named Monodon monoceros and belong to the family Monodontidae – the only living species of the whale of this family. The name Narwhals comes from the ancient word “Norse” which means ‘corpse-like whale’ as the body of these species has molted greyish coloration which looks like the corpse of drowned sailors. This article reveals the mystery behind the conservational status of the Narwhals.

What Is The General Description Of Narwhals?

Narwhals are a member of tooth whales which are native to the Arctic and the North Atlantic Ocean. These species have a cigar-shaped grayish body with small white patches, a pointed head, small flippers, and tail flukes. Interestingly, they are the unicorn of the sea as they possess’ long tusks which look like a horn. These species can reach a length of 18 feet maximum and are around 1,800 to 3,500 pounds. They are bottom dwellers which prefer to live in the extreme depth of the ocean where it is easy for them to search for food.

Where In The World Have Narwhals Been Listed as Endangered?

The following regions in the world considered Narwhals endangered, these are:

What Factors Affecting The Population Of Narwhals?

Certain factors have been greatly affecting the population of Narwhals, some of them are listed below:

Hunting of the Narwhals is the most prominent factor for the decline in their population. These species have been hunted for a long for the sake of their meat, blubber, and especially the tusk, which make them the important commercial whale. These species have been hunted for their skin also, as the skin is used to make oils. If these practices continue, there is a high risk of the extinction of Narwhals from the open waters.

The other factor which came in limelight is the overpopulation of humans because this may rises the rate of human activities such as the shipment of goods such as gas and oil which contaminates the ocean waters, adversely affecting the population of not only Narwhals but also risking the life of other marine animals.

As Narwhals prefer to live near the ice packs in the Arctic regions. Due to the change in climatic conditions, the ice packs melt which provides shelter to these creatures thus affecting the population of Narwhals greatly. Moreover, due to the narrow geographical range, the species are more susceptible due to changes in environmental factors.

Usually, the Narwhals are found roaming in a group of 10 or even more and protect each other from the predator. The noise of large ships produces loud noise which interferes with the ability of Narwhals to communicate with each other and thus resulting in decimated population by the effect of noise pollution.

Due to global warming, the temperature of the ocean water is rising at a rapid rate affecting the food chain greatly. If the temperature of the water becomes too hot the prey may die which may lead to the scarcity of food for the Narwhals. Moreover, the Narwhals may die if the water becomes too warm because they are adapted to the colder habitat and cannot find a place to migrate.

Narwhals are the only member of the family Monodontidae living today however, the species have been listed as Near-threatened under the Red list of IUCN. But in some regions of the globe, these species have also been considered endangered as well. The main factors which lead to the rapid decline in the population of Narwhals are hunting, overpopulation, climate change, noise pollution, and global warming. If these factors continue to rise then there are high chance of the Narwhals going extinct.