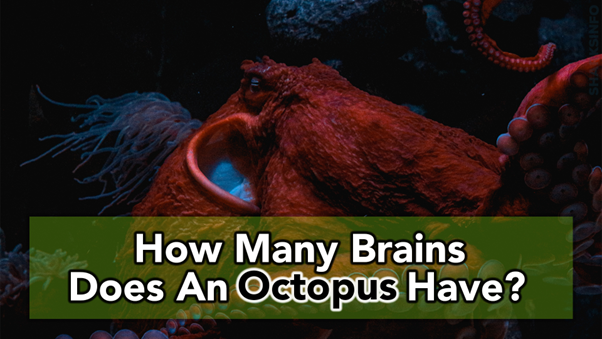 One of the most fascinating and intelligent sea creatures is an octopus, with its long arms and soft round bodies it definitely stands out. Octopus has been on the planet earth for millions of years and it still hasn’t stopped amazing humans. Here are some facts regarding the octopus brain and other features.

Octopuses (Octopus vulgaris) are cephalopods, members of the order Octopoda. They are soft-bodied invertebrates, noticed for their long eight arms having several suction cups. They have bulging eyes as one of the prominent features and have beaked mouths. They are carnivores and like to feed on lobsters, shrimp, and crabs.

Octopuses are regarded as an extremely intelligent species, thus it is fascinating to find out how many brains they have.

How Many Brains Does An Octopus Have?

Octopuses possess nine brains which they use to defend themselves from predators and hunt their food. They have one central brain and the other eight brains are located on each of the eight arms, so in total, they have 9 brains.

The central brain of octopuses is located between their eyes and has a donut-like shape. It creates a ring-like appearance around the esophagus of octopuses. The central brain has the autonomy to control the body parts and their functionality. It commands the mini-brains to perform a certain function, and those brains using their own neurons and brains perform the duty. According to an estimate, there is almost 180 million present in the central brain of the octopus.

There are four functional areas of the central brain including:

Due to the presence of a brain on each arm, their arms are capable of working independently by touching, moving, and even tasting without any instructions from the central brain. There are almost 40 million neurons are present in a single arm. All of these arms coordinate with eachother via neural rings.

Not for every decision, mini-brains need a command from the central brain but they can act on their own continuously adapting to their environment.

Octopuses are a blend of unique features which make them interesting to study. Here are some fun facts about these marine creatures.

1: Octopus’ blood is blue in color because a protein called hemocyanin is present in their blood.

2: Octopuses have been on planet earth for around 300 million years, according to their oldest fossil record.

3: Octopuses possess three hearts a total of which two are for blood circulation to the gills, while the remaining one passes the blood to other organs.

4: They have large optic lobes, that’s why they have a remarkable vision that makes it easy for them to recognize their prey and predators.

5: Octopuses use chromatophores present under their skin to change their color and blend in the surrounding environment to evade predators.

6: They can also change their skin texture as a defense strategy.

7: Octopuses have around 280 suckers present on each arm, though the number can vary from species to species, which they use to attach themselves to the surfaces.

8: Octopuses lack ears and can’t amplify sounds, but they can listen to sounds ranging from the frequency of 400-1000 Hz using their somatosensory system.

9: Octopuses release a toxic ink that causes irritation in the predator’s eyes and they easily escape.

10: Octopus die shortly after mating and one specie of octopus just detach its arm for mating and then grows that arm back.

Octopuses are cephalopods that have a total of nine brains of which one is the central brain while the other eight brains are located on each of the eight arms. All these brains make octopuses a highly intelligent species. Some of the other significant features of octopuses include their three hearts, blue blood, camouflaging abilities, and several suckers on their arms.