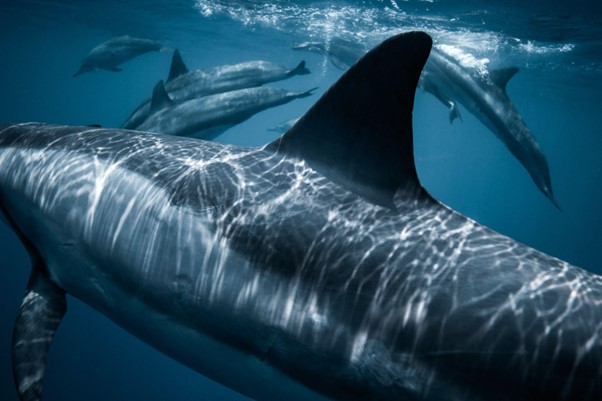 One of the most vicious creatures of the shark’s realm is The Great White sharks! The Great White sharks are famous for being the apex hunter of the ocean, they kill and eat other fishes so as to maintain a balance and ensure the survival of the strongest species in the ecosystem that brings evolution.

The surviving capabilities and the huge size of White sharks are enough to terror the other creatures of the ocean water but you will be surprised to know that the White sharks also have predators – even being the top of the food web, they are not free from predatory attacks!

You might think of White sharks as the king of the ocean world, but the true monarch of the ocean is someone else who is brave enough to attack and prey on The Great White sharks! Go through the article and know the names of the enigmatic predators! Let’s go!

Are there any known natural predators of the Great White sharks?

Yes! The Great White shark does have natural predators! You want to know??

Orcas – The Killer Whales are known to attack and kill White sharks – the natural hunters of one of the vicious creatures of the ocean!

The white sharks are known to be one of the most influential sharks with powerful bites because of the sharp razor-like pointed teeth. But these powerful sharks are not safe, they are prey too of the Killer Whale. Some other animals also prey on the leftovers of white sharks after being killed by Killer Whales.

Yes! The White sharks fear Killer Whales! The sharks avoid interacting with Killer Whales. If sharks spot the Killer Whales in their feeding zone, they evacuate the areas as soon as possible and avoid them. The shifting of sharks from their popular feeding area makes researchers stunned because sharks usually stay in their natural habitat for weeks, months or even years! Sharks smell the scent of the Killer Whales and leave the field until or unless whales reside in the area! The landscape of fear!

Sharks feel fear about the Killer Whales because they always attack in a group from all sides to prevent the sharks from escaping! The whales attacked sharks, hit hard on their large liver and squeezed it out – making the sharks a bit unconscious! The first strike! After that whales injure sharks by attacking the live organs present behind the pectoral fins, making a wound and pulling the live organ out of the skin, thus killing the magnificent creature of the ocean! Whales – the true killers!

Humans are also the top predators of the White sharks – Really?

Yes! Humans are also included in the list of top predators of White sharks! Human activities have greatly affected the population of sharks in the water bodies. Humans either directly kill white sharks or adopt different ways such as hunting a shark by fishing only for commercial purposes or sell them in markets at high rates. The teeth of white sharks have also been sold in markets at high prices to make decoration pieces or jewellery.

Moreover, the boat’s propellers also impact the population of sharks, sharks mostly become victims of the boat propellers which slice the dorsals of the sharks and severely injure them. Pollution, the other factor which eventually leads to the death of white sharks. Pollutants such as wastewater, chemicals, sewage, radioactive waste, oils and plastic greatly affect the natural habitat of sharks. Ocean acidification, climate change, melting of ice caps and temperature fluctuations are the additional risk for the shark’s survival.

The Great White sharks are known as the top predators of the ocean but surprisingly they are not free from their own predators. The Killer Whales are known to attack and prey on white sharks – that’s why the sharks fear the whales and avoid the regions where their whales reside! Other than whales, humans are becoming the predators of white sharks – they kill sharks directly! Overfishing, pollution, habitat destruction, climate and temperature change, also had a great impact on the population of sharks! Labelling them endangered species!