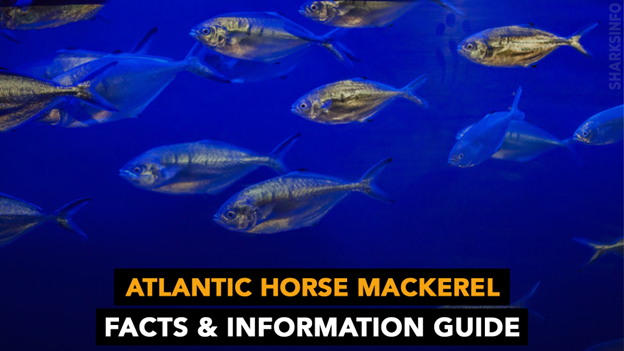 The Atlantic horse mackerel (Trachurus trachurus) is a pelagic fish found in the waters off the coasts of Europe and the Indian Ocean. It is a member of the jack family, which also includes the jack mackerel and the trevally. There is a growing demand for horse mackerel as a food fish, as well as for oil production.

Little has been known about the species despite being an integral part of marine ecology. The following sections are going to cover everything you need to know about the species and will include some amazing facts as well.

The Atlantic horse mackerel is a medium-sized fish with a maximum length of around 24 inches. It has an acutely forked tail and a body that is covered with small, shiny scales. The back and upper sides are blue-green in color, though the abdomen area is white. There are dark spots on the sides, and a dark line goes alongside the length of the body.

The Atlantic horse mackerel is an important commercial fish and is harvested for both human consumption and fishmeal.

The diet of the Atlantic horse mackerel consists mostly of small fish, squid, and crustaceans. The mackerel feed on these animals near the surface of the water, using their sharp teeth to tear them apart. The mackerel are opportunistic feeders and will also eat carrion if they come through and there is no other option available.

This species is of commercial importance and is caught using a variety of methods, including purse seines, gill nets, and trawls. It is used fresh, ice-covered, or preserved and is also popular as a baitfish. The Atlantic horse mackerel is considered to be a good food fish and is highly valued in many countries.

It is because of this wide migratory range that the Atlantic horse mackerel’s lifespan varies from place to place. According to the latest research, southern region mackerels live as long as 24 years, while northern mackerel live as long as 40 years. It clearly shows how the surrounding environment affects the life expectancy of the species.

The Atlantic horse mackerel is not currently listed as rare or threatened. However, overfishing and bycatch are still major threats to the population. Atlantic horse mackerel are often held as bycatch in commercial fisheries aiming at other species. They are also popular in recreational fishing. The IUCN, as of now, has rated the species as vulnerable.