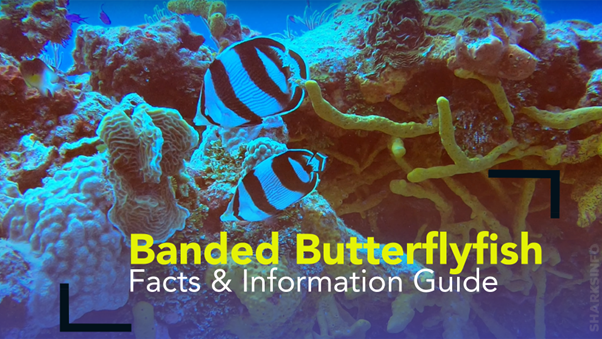 Don’t be confused, it’s a fish, not a butterfly.

In 1758, Carl Linnaeus discovered a unique type of fish, which look like a butterfly named the Banded Butterflyfish. The Banded Butterflyfish is a member of the marine rays finned fish group. Scientifically, they are known as Chaetodon striatus belonging to the family Chaetodontidae – the family comprises 115 species. Moreover, they are commonly called by many names such as the butterflyfish, the butter bun, the Portuguese butterfly, the banded mariposa, and the schoolmistress. This beautiful butterfly-looking fish needs to be explored more. What say?  Let’s go with us to take a deep analysis of their living habitat.

Where In The World The Banded Butterflyfish Are Distributed?

Geographically, the Banded Butterflyfish are native to theWestern coast of the Atlantic Ocean, the Gulf of Mexico, Brazil, the Caribbean Sea, Australia, and along the St. Paul’s Rocks on the Eastern coast of the Atlantic Ocean. These species prefer shallow water and are sighted mostly around the coral reef regions, at the depth of 3 to 82 feet or 1 to 25 meters. Although the family comprises 115 species most of them inhabit saltwater habitats.

What Is The Physical Appearance Of Banded Butterflyfish?

The Banded Butterflyfish have round and circular bodies which have the unique coloration of red, yellow, orange, and blue with a large black silvery band on the back or around the eyes. They have small spines-like appendages located on the pointed snouts or the forehead. They can typically grow to a maximum size of 5 to 8 inches and weigh approximately 20 to 80 grams. They have small mouths, having small comb-like teeth that are arranged in multiple rows in a jaw.

What Do Banded Butterflyfish Eat?

The Banded Butterflyfish are predatory hunters that feed on diversified stuff, such as:

What Behavior Do Banded Butterflyfish Exhibit?

These species are most active during the daytime and rest during the night hours. The Banded Butterflyfish travels usually in a small school but when they are alone, they are found around the seagrass beds. Moreover, they exhibit unique swimming patterns when have to gain the attention of their mate.

What Is The Reproductive Mode Of Banded Butterflyfish?

The Banded Butterflyfish are believed to be monogamous which means that they mate with only one partner throughout their life. The breeding season usually takes place in winter and early spring. During mating, the female releases eggs, and the male releases sperm in the water forming a white cloud. After fertilization, the eggs hatch in just 28 to 30 hours, and larvae are free to swim in the water for further development. The larva develops a plate of bony armor which extend from head to tail forming a spine indicating the start of the juvenile stage. The Banded Butterflyfish reaches a maturity level after a year and have an expected life span of 10 years.

What Is The Conservational Status Of Banded Butterflyfish?

Although, the Banded Butterflyfish have a wide range of distribution over the globe they have been extensively harvested to keep them in captivity or for aquarium trading. This greatly affects the population of Banded Butterflyfish in wild. However, according to IUCN, they are considered as “least concern” species.

Banded Butterflyfish are not much popular among the fisheries as there is not much known about them, so we have compiled some additional information for you.

1:  The name of Banded Butterflyfish is derived actually from the dark-colored vertical bands on their body.

3:  They serve as cleaning fish by removing the parasites from other fishes such as parrot fish or surgeon fish.

4:  They have a very peaceful and calm temperament.

5:   Their flat body allows them to pass through the crevices in the coral reefs,

7:   In captivity, they need seagrass beds, mudflats, lagoons, and corals around them.

8:  The Banded Butterflyfish have a very close resemblance with the Angelfish in shape.

9:  They are very agile species and are capable of changing direction in a moment.

10:  The population of Banded Butterflyfish remains more stable in wild than in captivity.

The Banded Butterflyfish of marine rays finned fish group that is commonly sighted on the Western coast of Atlantic waters. They have circular bodies that can grow to about 5 to 8 inches and weigh approximately 20 to 80 grams. They are monogamous species that either lives singly or in a school of 10 to 12 members. For display in aquariums, they have been harvested from their natural environment. Moreover, they have also been listed as Least Concern by the Red list of IUCN.