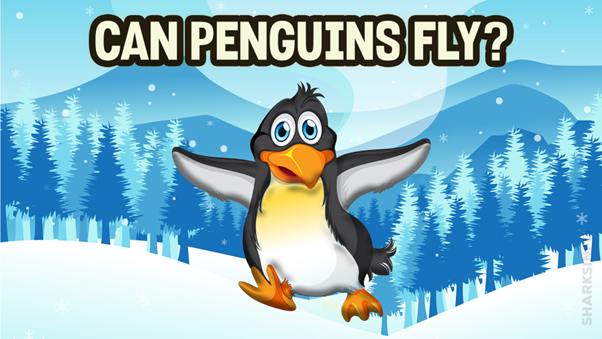 You’ll find these adorable penguins dancing, surfing, or plodding here and there in their habitats, but you won’t see them flying. Why is that so? Aren’t they birds? And birds are supposed to fly, right? Well, we do expect penguins to fly but certain reasons do not allow them to do so. Let’s explore the reasons behind penguins not flying-whether it’s by choice or due to natural reasons.

But first, let’s have a quick glance at our favorite penguins.

Adaptable to the marine environment, penguins are aquatic flightless birds that have flippers instead of wings. Penguins are found living below the equator as they prefer cold environments. They love to dwell and reside in icy Antarctica as their oily feathers and a thick layer of blubber help them remain warm.

No. As much as you believe that penguins can fly, they cannot. They have wings, but those wings are evolved to be suitable for swimming rather than flying. That’s why penguins are very good at swimming and can easily swim at the speed of 15-25 miles per hour. Their evolution has allowed them to dive into the deeper waters which are even 900 times denser than the air.

Penguins can’t fly because they have flippers, an evolved form of wings, which cannot produce enough force to help them fly in the wind. Instead, these flippers are at an advantage when it comes to generating force to swim. They can easily cut through the dense water because of their shorter and stiffer wings.

Did Penguins Ever Fly?

According to researchers, it is believed penguins used to fly some million years ago.  Though the fossils of any flying penguins aren’t found yet, this hypothesis is based on the oldest fossil of the penguin which is 62 million years old. That penguin was found to be flightless as well, but it resembled the puffin-like animal; from which they are believed to be evolved and were known as flying birds. But over time they traded their flight skills with diving skills by adapting genetic and physical evolution.

Why Did The Penguins Stop Flying?

The answer to this lies in natural selection and evolution- a concept widely observed in all living beings over time. Penguins transformed from flying birds to wing-propelled divers over the centuries as a result of a process of evolution. It is believed that the predecessors of penguins used to fly, but they were not threatened by any predator. No threat means no use of the mode of survival.

Once they embarked on the journey of becoming better swimmers, they adapted changes in their wing structure, bone density, and shape as well.

Can Penguins Ever Fly Again?

Well, that’s a mystery. But they might not be able to fly again, according to science, as their ancestors did. It’s because evolution has adapted their bodies to swimming, as they face little to no threat in the water instead of land. And with the changing climatic conditions and the population declining in certain regions of the world, nothing can be said for sure.

Penguins cannot fly, as they are flightless birds but according to research, it is believed that this happened over the years once they were flying birds. But modern-day’s penguins can only be good swimmers and have given up their flight abilities completely. You’ll either see them waddling on the ice, hopping, running, or swimming only but not flying.