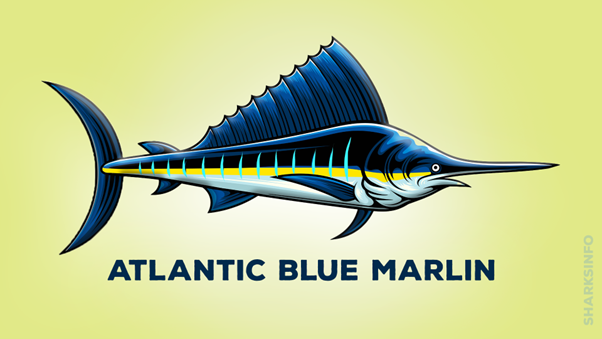 Ocean- this single word entails hundreds of mysteries and mysterious creatures which fascinate humans to date. Thankfully, with the advancement in technology and extensive studies on sea life, we’ve come to know of some unique species roaming in the sea. One such specie is Atlantic Blue Marlin which catches the human eye at first glance due to its striking colors and swimming abilities. Let’s have a deep look inside the life of an Atlantic Blue Marlin to know them better.

What Is Atlantic Blue Marlin?

Scientifically known as “Makaira nigricans”, the Atlantic Blue Marlin is the largest billfish native to Atlantic Oceans. They are considered one of the fastest and largest fish in the world. They are the relatives of swordfish as they share some anatomical resemblances with them.

Let’s take a look at the major characteristics of the Atlantic Blue Marlin.

The Atlantic Blue Marlin’s females weigh heavier than their male counterparts, as they weigh around 2000 pounds and the male could only weigh around 300-400 pounds. They can grow upto 14-16 feet.

They remain true to their name and prefer to live in blue oceanic waters. They are usually found swimming in warm waters of the Pacific, Indian, and Atlantic Oceans near the surface. However, they show highly migratory behavior as they keep following the ocean currents to hunt the school of fish. During winter, they are also spotted in the equatorial regions.

How Does Atlantic Blue Marlin Reproduce?

The Atlantic Blue Marlin after reaching the age of maturity, which is two to four years, starts breeding. In the late summer or end of the fall, the females start laying hundreds of thousands of eggs in one go in the ocean, as they prefer external fertilization. Meanwhile, male releases their sperms which fertilize the eggs. The maximum lifespan of the female and male Atlantic Blue Marlin is 27 years and 18 years, respectively.

How Does Atlantic Blue Marlin Hunt?

This mesmerizing beauty of the ocean is known to hunt and feed at night. They use their large eyes which have the ability to increase visibility during low-light conditions by heating their eyes with the help of special cells. To capture their prey, they employ their sharp bill to swaddle from the school of fish, which eventually kills or injures the fish; and that fish become prey for Blue Marlin.

What Does Atlantic Blue Marlin Feed On?

For feeding purposes, at the planktonic larvae stage in their life cycle, they prefer to feed on fish eggs and other larvae. As they grow to become carnivorous they start consuming a variety of fish including dolphinfish, bullet tuna, and frigate mackerel. Sometimes, they also dwell deeper in the ocean to consume cephalopods like squids.

Major Threats To The Survival Of The Atlantic Blue Marlin

Some of the major threats to the survival of the Atlantic Blue Marlin are overfishing, increased boating, accidental bycatch, and sea pollution. Other than these human-caused factors, Blue Marlins are also preyed upon by their ultimate predators- white great sharks and shortfin mako sharks. All these factors combined have been pushing these species toward the extinction in near future.

The Conservation Status Of The Atlantic Blue Marlin

According to the recent assessment under the IUCN red list, the conservation status of the Atlantic Blue Marlin has been designated as Vulnerable. This has happened because of the overfishing of species in multiple parts of the world for both hunting and commercial purposes.

The striking cobalt blue and silver color of the Atlantic Blue Marlin along with its spear-shaped upper jaw make it stand out in a vast ocean. They are known for their large bodies and fast swimming abilities but even these abilities can’t save them from becoming prey to the other sharks or getting hunted by human activities. If you want to keep seeing this mesmerizing sea creature roaming in the ocean, then you must avoid any of the activities that pose threat to their existence.