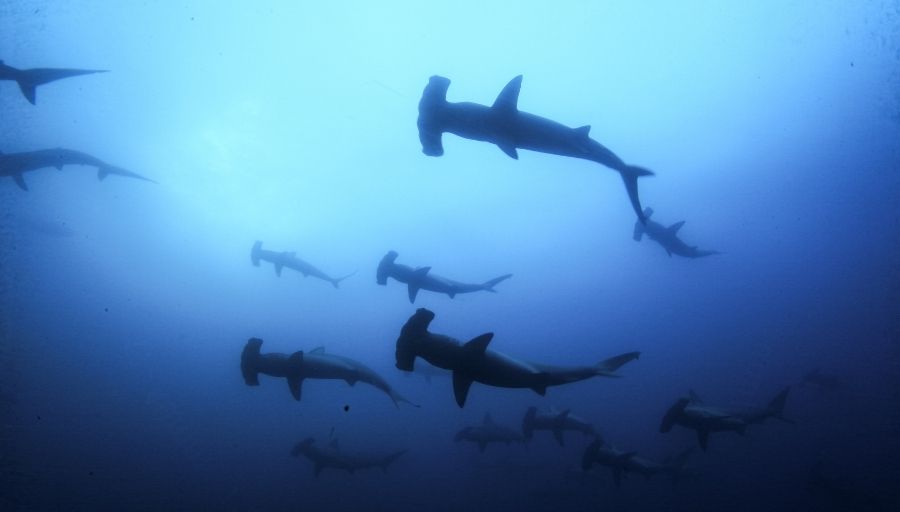 You’ve probably never considered in the past whether or not sharks can swim backwards. If you’re like us, you probably assume that they can’t and don’t waste anymore time pondering the question. Interestingly enough, the answer may surprise you! Read on to find out if these feared predators can swim backwards.

Sharks are a group of cartilaginous fish meaning that their skeletons are made of cartilage rather than the typical bone structures we have. Along with this, sharks are identified by a series of gills to aid in respiration, several rows of specialized teeth with various functions, and pectoral fins that do not fuse with the head, used primarily in steering. Shark skin is not composed of a singular, continuous membrane; rather, it is made of a series of conjoined subunits that, when fused together, act like an outer skeleton for the shark. The main functions of shark skin include maximizing efficiency in movement and conserving body heat as well as energy.

Together, these are the factors that place sharks at the top of the marine food chain and regulate the populations of all shark species. Most shark species are genetically adapted to live in a wide range of aquatic habitats, with habitats spanning from the deep sea and open ocean to shallower coastal regions and rivers.

Like other marine animals, shark have different genetic adaptations across species, but a shared adaptation that can be observed is their specialized bodies that allow them to move at high speeds. The physiology and technique differ from species to species, but the function remains the same. For example, some species, such as the big white shark, drift with their tails through the water, while others move their bodies from side to side with their fins to balance. The speed of their movement depends on their body shape — some are cruisers, some are fidgeters, some generalists, some swimmers, some undulators, and some flappers.

To understand why sharks can’t swim backwards, a deeper dive into their movement is necessary. To initiate movement, most sharks move their tails side to side and push the water away with their fins. In case the shark wants to tip back, it depends on gravity to fall forward.

If you’ve ever gone cage diving or seen a shark swimming in an aquarium, you’ve probably wondered whether or not it could swim backwards. This is because sharks move more laterally instead of directly forward and swim in the opposite direction of forward motion. Sharks cannot swim backwards because their physique does not allow them to swim.

Sharks cannot swim backwards because their pectoral fins do not curve to allow them to move backwards. Furthermore, there are certain shark species that have to keep moving forward to breathe, and for them it makes no sense to have an adaptation that allows them to swim backwards.

In general, for a shark to breathe, water first must flow into its mouth and then into its gills. When a shark is swimming, the water flows from its front to its back. If a shark could swim backwards, however, water would not follow this path. Instead, the water would flow directly into the shark’s gills and disrupt its breathing process, possibly leading to the shark’s death.

While this sounds unethical, fishermen use this very concept to kill sharks. Once the shark has been caught in their line, the fishermen then pull the shark back ashore and let the water flow from their backs to their fronts. This effectively kills the shark.

In short, due to their methods of swimming and their physiologies, sharks only move forward.

Sharks depend on this physiology for everything. Over the millions of years that sharks have existed, they have developed these bodies adapted to swimming in water. There are several ways for sharks to do this: cruisers, swimmers, zappers, undulators, flappers, etc.

However, all these factors are meant only to contribute to forward movement. The most common movement is the use of the tail to move the body. Even in sharks that move sideways with their body their tails still act as rudders and provide the forward force. From this, we can discern that sharks’ tails play an important role in their movement.

While at first glance this seems like a disadvantage, another advantage sharks have is their inability to swim back and forth.

As we know, this inability ensures that sharks do not drown in the water. When sharks swim forwards, they are able to maintain their standard breathing process. Water flows from their open mouths and gets pumped into their gills, where the gas exchange takes place. Swimming backwards, however, would let the water out of the gills, which would ultimately lead to their deaths.

As a species, sharks are designed to be predators and as such, they’re meant to be on the move — everything is about speed and power. Knowing this, their physical adaptations — even their inability to swim backwards — makes sense.

The Epaulette Shark Can Swim Backwards

However, there are exceptions to this rule. The Epaulette shark is a shark known for its ability to walk on reefs, the sea floor and even on land. You’ve probably heard of migrating sharks.

Some shark species have the extraordinary ability to go backwards. The Epaulette shark can swim like other shark species, but can also go backwards in unique fashion. Remember that they do not swim backwards, but go forwards and backwards. Running backwards is very different to swimming. It implies moving in a wavy, creeping motion.

Sharks breathe differently from other shark species and use their gills for gaseous exchange. This means that they need water to breathe and can survive in areas with low oxygen.

If a shark swims backwards, its breathing gets disrupted and the shark dies. This happens when water flows from behind the shark into its gills rather than flowing through the mouth into the gills.

That means swimming backwards is equally as dangerous for sharks as not swimming at all. Due to their physiology and their breathing process, such sharks have no other choice but to swim forwards — any other alternative would mean certain death.

Although these sharks cannot move backwards or stop swimming, they can still move from side to side. This allows them to dodge objects without really slowing down or changing direction. Fast sharks like the great white shark, which do not change direction, will sometimes just plow into obstacles and destroy the objects around them. An example of this would be the destruction of cages. When great white sharks are swimming at a cage, they do not try to avoid it — they simply hit it head on in the hopes that it will get crushed.

For these sharks, though, whether they stop swimming or not is up to them. Sharks have to keep swimming to stay alive, but just because they can’t stop doesn’t mean they won’t ever stop. Sometimes they can position themselves in front of a current so they can stop and breathe simultaneously.

There are certain shark species that do not need to keep swimming, and they use a technique known as buccal pumping to pump water out of their gills while lying on the seabed. These sharks can choose to remain motionless or move, either way they will pump water through their gills. Examples of such sharks are nurse sharks, reef sharks, and Epaulette Sharks.

Although these sharks can stop swimming, they still can’t swim backwards, and even they can be killed by dragging them back. Shark in general are unable to process the water that flows through their lungs in a negative direction. If you pull the shark backwards, it will suffocate and run out of oxygen. Eventually, it simply stops breathing and dies.

Sharks differ from other fish in that they do not hold back and pull forward. Other fish process water in the opposite direction in order to gain oxygen with their gills. These fish require additional efforts to suffocate and retreat.

In other words, the sharks have no choice but to maintain their natural swimming direction. Now that we know that sharks cannot and should not swim backwards, it is important to prevent them from getting into this difficult situation.

Although this direction of movement does not directly affect the shark, it can lose oxygen. This can lead to shark deaths.