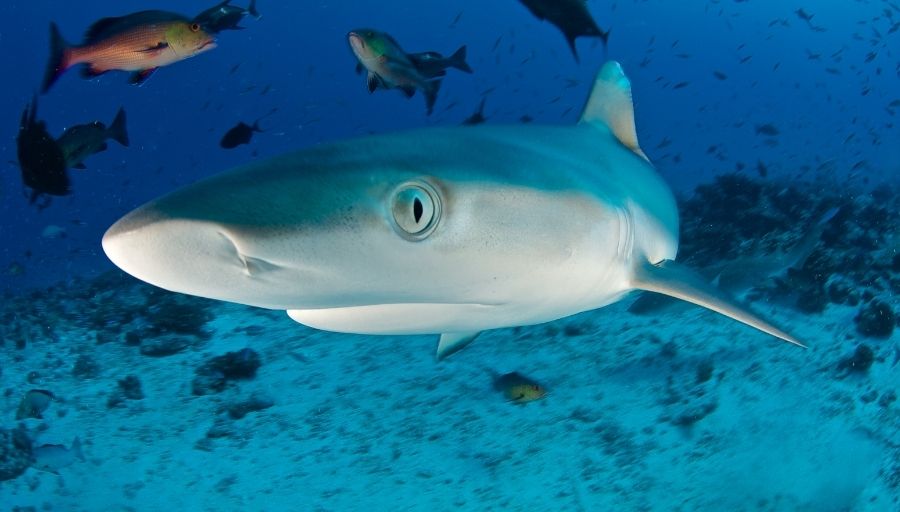 Throughout millions of years, sharks have occupied world waters as magnificent, fascinating, and powerful creatures. This species clearly demonstrates its intelligence and capabilities by dominating other sea creatures. However, despite their strength, power, and competence, there are many who believe sharks have low vision and are unable to see clearly in the water. Furthermore, many fishers have reported that sharks have collided with boats and other objects more often than any other marine creatures.

As a result, we have been left with a very important and thought-provoking question about whether sharks can see or not.

Sharks are an amazing species of the ocean and, over the course, have been diversified into over 500 species, where each one exhibits different attributes, traits, and behavior. There are species as large as reaching a length of 50 feet and as small as a few inches that you can hold in your hands. Varies in sizes, shapes, and colors, but what about eyesight? Do sharks clearly see through ocean waters, or do they have a blind spot? All this confusion will be swept away by the end.

Can sharks see, or are they blind?

Sharks are magnificent creatures that hundreds and thousands of tourists around the world pay huge amounts of bucks just to have a glimpse of sharks. But do sharks have the ability to see the beauty of the world around them? The answer is yes! Sharks have eyes and are assumed to have excellent vision. In fact, the shark’s eyesight is far better than we can imagine. This rules out the possibility of claiming sharks to be blind.

Sharks are not blind, but surrounding conditions and other factors may affect their ability to see clearly through the water. Furthermore, sharks may not be able to distinguish colors, but their vision is still good enough to catch their prey on the move. Whatever the case is, it will be clearer as below we are going to discuss shark eyes in detail and how they work.

How do sharks see?

The eyesight of sharks is impressive; indeed, it is better than that of humans in clear water. There have been many assumptions that sharks’ eyes are one of the hardest and least understood facets of their bodies. Therefore, it may come as a revelation that their eyes resemble human eyes in many ways.

Shark eyes do not differ greatly from human eyes in terms of structure; they include corneas, lenses, retinas, pupils, and irises, as well as two types of photoreceptors, rods, and cones. Vision in low-light conditions is provided by rods, whereas color perception is controlled by cones.

While sharks are able to see in color, it isn’t known to what extent they can, though they don’t have a full-color vision as humans do. Scientists are working on to see how effectively the cones work and how sharks perceive color.

Due to the fact that the shark’s eyes are almost on opposite sides of its head, it has two blind spots: right behind and right in front of its snout. In order to overcome this problem, sharks make a circular motion or wave their heads from side to side to ensure visibility.

Just behind the retina, there is a layer of mirrored crystals called the tapetum lucidum, one of the most important characteristics of shark sight since it is why sharks can see in murky or deep waters despite low light conditions.

Retinas are able to reflect light back onto the retina when light passes through them and hits the crystals. When sharks are swimming in murky water and dim light, these crystals are highly effective in helping them to see. A shark’s visual skills in dim light are about ten times better than a human’s because of this element.

As a matter of fact, cat eyes also have the tapetum lucidum, and that is why you see them glowing in the dark at times.

Are sharks blind when they attack?

As another unique feature of shark eyes, they have eyelids, which are used as a means of protecting the eyes against abrasion during encounters. This is why you often see shark eyes closed when it hits an object or attacks prey.

Other than that, the shark eyes also have a nictitating membrane which serves as a protective shield for the eyes. Sharks like white sharks and whale sharks do not possess this membrane, and therefore they roll their eyes back when hunting as a way of protecting them. With this, the size of shark eyes also varies from species to species.

As it turns out, sharks have two ways to protect their eyes, both of which render them visually impaired essentially during the last moments of an attack.

Aside from sighting, sharks have other senses, including hearing sense, lateral lines, and electroreception, that work together and make sharks the dominant creatures.

In the ocean, sharks are incredible creatures and many of the species rank as top predators. Despite their predatory behavior, sharks have long been believed to be blind eaters and unable to see at all. Sharks are not blind, as is commonly believed; they have excellent eyesight and are able to see even in low light situations. In fact, we may perhaps never be able to see the ocean like sharks do.