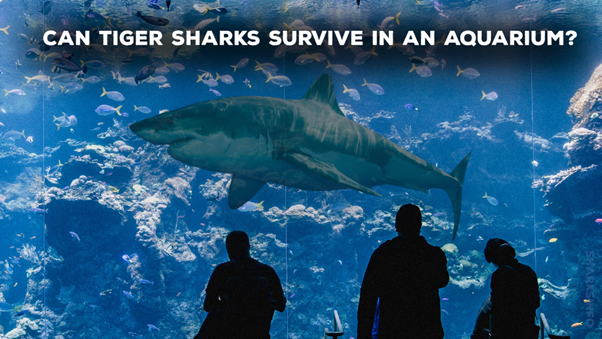 Galeocerdo cuvier commonly known as the Tiger shark is the largest carnivorous species and the voracious species of the ocean. The giant species can grow to a maximum size of 16 feet and weigh more than 635 kg. Due to their enormous size, these species are the hot topic of discussion among the people that whether these sharks will be able to survive or not if kept in captivity. Scroll down to find the answer.

Can Tiger Sharks Survive In An Aquarium?

Yes but for a short interval. But in the long run, Tiger sharks do not belong to an aquarium. That is because of many reasons among which their size tops the list. This giant specie is hard to captivate in aquariums keeping in view their living and food conditions, which if not met, can lead to their death. Due to their giant size and wild habitat, Tiger sharks are not kept in the artificial environment. Moreover, they require a large amount of live food such as seals, dolphins, sea birds, eel, and sea lions which are not available there so they may die if forcefully kept behind the glass window.

Why Tiger Sharks Cannot Live In An Aquarium?

There are many reasons why it is quite impossible to keep them in the aquarium. As they are the largest predatory species, they require more space to live, and the cost of the tank and other necessary equipment to keep the water clean is not affordable for everyone.

Secondly, the fearsome species prefer to live alone, that’s why, if in captivity they are kept together with other mates thenother members may get injured by the attack of Tiger sharks.

Further, food is necessary for their survival and they require a large amount of live food such as seals, dolphins, sea birds, eel, and sea lions. Such food is not available in aquariums, thus it is hard to fulfill their food demands.

What Happens If Tiger Sharks Are Kept In Captivity?

They may die. The Tiger sharks as they grow in size bump themselves into the wall of the aquarium and get severe injuries. However, few aquarists do try to keep the young Tiger sharks in captivity and as they become mature, they release the sharks back into their wild habitat.

Which Aquariums In The World Keep The Tiger Shark In Captivity?

Some aquariums in the world are trying to keep Tiger sharks in captivity to amaze people. Here is the list of those aquariums.

1: The Georgia Aquarium USA: It keeps the Tiger sharks in captivity by providing them with an artificial environment having a 1.2 million gallon water holding capacity, with a depth of 200 feet. Under these circumstances, the young Tiger shark survives for a few months and as they outgrow, they are released back into their native habitat.

2: Maui Ocean Center, Hawaii:  It keeps the young Tiger sharks alongside their ocean location to cycle the sharks back to the ocean regularly.

3: Okinawa Churaumi Aquarium, Japan:  They keep the juvenile Tiger sharks of about 2.5 feet in the aquarium and when it grows to about 6.5 feet they release them back into the ocean.

4: Acuario De Veracruz, Mexico:  This aquarium is somewhat famous of keep several species of Tiger sharks for more than 7 years. However, these species are temporarily kept and then released into the ocean.

Tiger sharks are one of the enormous creatures of the oceanic world, they live solitary in their wild habitat and require a large amount of living food to boost up their body energy. All these conditions are not affordable for any of the aquariums as it is a costly procedure. However, some aquariums in the world try to keep several juvenile Tiger sharks in captivity but release them back into the ocean as they grow in size. Thus it is right to say that Tiger sharks do not belong to an aquarium.