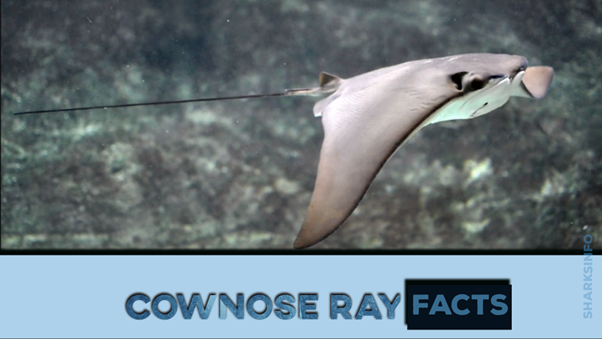 Cownose rays – a relative of skates and sharks which means they fall under the category of cartilaginous fishes. They are scientifically known as Rhinoptera bonasus and belongs to a family of Stingrays (Myliobatidae) – the other member includes Eagle rays, Manta rays, and Bat rays.  Though they have olive coloration like the other members, the unique shape of the Cownose rays makes them look different from the rest of the members. These species are not widely known to people which is why we are going to share some useful information as well as known facts about them.  So without wasting time, Scroll down!

What Habitat Do Cownose Rays Prefer?

Cownose rays are common among the warm coastal water of Africa, The Atlantic Ocean, The Gulf of Mexico, the Eastern Coast of the United States, and the Caribbean Sea. Though these species are common among open and extended waters but can also inhabit estuaries, bays, and shallow inshore waters. They are highly migratory species and prefer to live at the depth of 72 feet or 22 meters with a water temperature of 22o C.

What Is The Physical Appearance Of Cownose Rays?

You might wonder about the name of the rays. Right! Well, we must let you know that they are named so because they have a unique shape of the forehead which looks like the nose of a cow. They are brown to olive-colored species without any spots on the top of the body and are pale-colored from the underside of the belly.

They have flat but large teeth that are embedded in a powerful jaw – each jaw contains 11 to 13 teeth in 7 series, this arrangement helps them to crush the prey. The Cownose rays can have an average length of 3.8 feet or 1.2 meters but the largest specimen recorded can have a length of 7 feet or 2.1 meters.

What Do Cownose Rays Eat?

Cownose rays usually feed in the morning hours or the late afternoon hours. They possess electro-receptive cells that help them to find their prey buried in the sandy bottoms. They include diversified items in their diet, such as:

How Cownose Rays Do Reproduce?

Cownose rays are ovoviviparous species which means the offspring develops inside the mother’s womb and give birth to them after the hatching of the eggs. These species have an extended breeding season from June to October and a gestation period of 11 to 12 months. The females become mature at the age of 5 years whereas the males reach the maturity level at the age of 16 years.

What Is The Conservational Status Of Cownose Rays?

Due to their low reproductive rate, these species are not common among the fisheries. That’s why they are considered “Near Threatened” by the IUCN Redlist.  However, the species have to face predatory threats under the water which causes the decline in their population, the common predators are cobia, Hammerhead, Bull sharks, and Sandbar sharks. According to an estimate, around 30 to 49 % of the population of Cownose rays has decreased in the last 43 years.

Here are listed some of the known facts that are lesser known to people:

1:  Commonly, they are named cowfish as their forehead resembles the nose of a cow.

2:  Cownose rays are pelagic species which means that they live to thrive along the coast.

3:  They always prefer to travel to schools, the school may comprise thousands of species.

5:  They possess wings-like structures which help them swim, and look like the dorsal fins of sharks.

6:  Their tail is round or oval shaped which they use as a weapon to kill the prey in one stroke.

7:   They have well-developed eyes and spiracles for breathing, both are located on the side of the head.

8:  Due to the high predation of oyster beds, the population of Cownose rays has been increasing continuously.

9:  Over the globe, many aquariums such as Adventure Aquarium in Camden, New Jersey, and Aquarium of the Pacific in Long Beach, California have Cownose rays in captivity and make it safe for people to touch them.

10:  They rarely attack humans and do not pose any harm to them. They attack only when they feel threatened.

Cownose rays are named as their forehead resembles that of the nose of the cow. They have a wide range of distribution and are usually seen near the coastal region at a depth of just 72 feet or 22 meters. They bear electro-receptive cells that help them locate the prey buried in the sandy floor. Remarkably, they are ovoviviparous species with a gestation period of only 11 to 12 months. Though they are not very common among the fisheries, the population of Cownose rays has been declining due to underwater predatory threats.