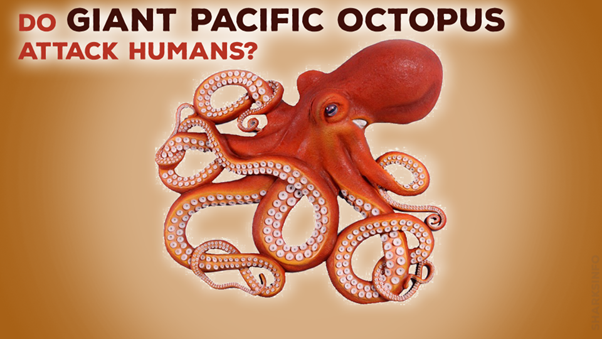 Octopuses are sea animals that seem menacing and their physical appearance is ghastly to an extent, naturally, humans do not come close to them in oceans as their eight arms have the capability to attack and tangle any organism it chooses to ingest. It is also consumed by humans in some countries.  It can attack humans when it feels threatened…

What is Giant Pacific Octopus?

It is an octopus as its name clearly states –  it is gargantuan in size. The northern Pacific Ocean is home to the huge Pacific octopus, which is regarded as the largest octopus species in the world.

Octopus That Has The Capability To Attack Humans

The Blue Ringed Octopus is observed to attack humans as it has the habit of attacking any living organism it comes in contact with.

Features Of The Giant Octopus

By its name one can come to the conclusion that it is giant for sure- its length varies between 16- 30 feet and that is a ginormous size for any animal to have and one assumes that such a gigantic animal should be feral and lethal. Its weight varies between 110lbs- 600lbs and it is massive bruh. Its suction cups on its eight arms can lock humans badly, it can suffocate humans, and can be fatal.

It also has venom which it injects into its selected target and it is tested that the venom it excretes is not fatal but, it is virulent to an extent. Even though the octopus is humongous, it is observed that it has a friendly attitude.

A group of Russian divers claim to have been attacked by the Giant Pacific Octopus and its video is also present on youtube… By closely observing the video; one sees that the diver himself was teasing the octopus; animals are alive and they feel things too… if we- humans would feel so offended, as any other human tries to violate our privacy then the animals also dislike it. What is the point of going so close to the octopus for taking snaps; it means if the octopus attacks you- you asked for it.

Another woman placed a baby octopus on her face to take a pic and in return, she was bitten and injected with venom and it ended up in the emergency room… So, such incidents are quite evident and prove the imbecile behavior of humans; though humans should use their brains often.

Mostly it lives in the Pacific Ocean- on the North side, it is present in Japan too, and also in Alaska and California.

Any animal- even humans would never tolerate it if anyone invaded their privacy- one understands that for education purposes animals are filmed and one can not take consent from animals… but, making it a habit to take pics for amusement is also wrong. Animals can not notify how they feel so humans should also not treat animals badly. We can take care of animals by providing a hygienic- clean environment. Animals do not pollute- it is the humans.