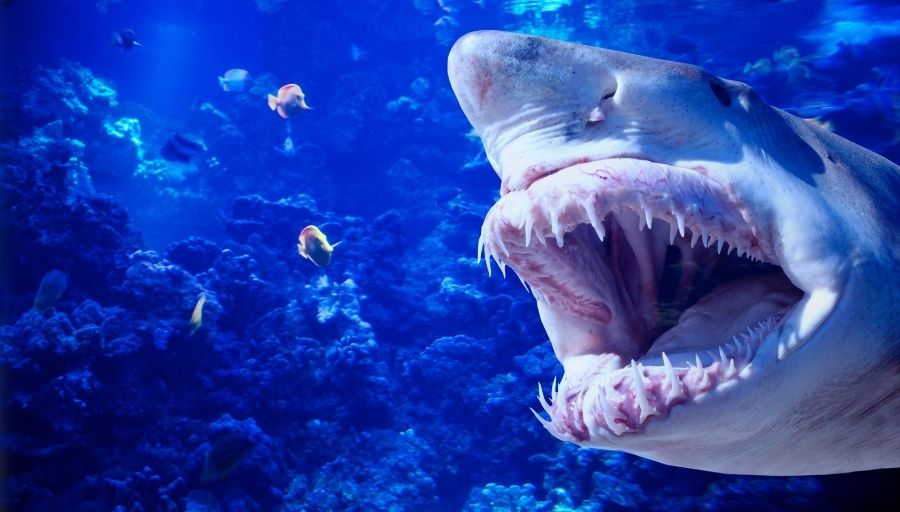 The villains of the oceans, the man-eaters, the great hunters, and so many other titles are given to the species known as sharks. In one way or another, we all are familiar with the species, and it comes as no surprise sharks are portrayed as violent beasts with saw-like pointed razor-sharp teeth. Every time we see a shark opening its mouth, whether in real life or in movies, we only see its teeth, and being scared, we never pay attention to whether sharks have tongues.

Having no tongue is hard to imagine as a human, but do sharks have a tongue is the most enthralling question one can ask. Deep into our minds, we all want to find out. In this article, we’re going to answer that question.

Do sharks have tongues?

Sharks are the fascinating creatures of the ocean, and each aspect of them is full of surprises. Being diversified into over 500 species, you will find sharks as large as 50 feet and as small as a few inches only that can fit in your palm. Not only the size but weight can also vary significantly. Similarly, other characteristics of sharks, such as their habitat, behavior, and diet, also differ with respect to individual species.

When you look at the shark’s teeth, they are designed to help them feed their particular diet. While some sharks have serrated pointed teeth like the ones great white sharks have, others have tiny smooth same as the whale shark.

Know that great whites are the largest predatory hunters and mainly feed on large mammals and fishes, whereas the whale shark is a filter feeder shark and relies on plankton as their main food source. Keeping this in mind, it justifies the variation in both species’ teeth.

No matter the species, we hardly have seen a shark tongue which makes people wonder if they do have one or not. Shark teeth are ferocious, and their aggressive behavior is no mystery but tongues, not sure about it.

As a matter of fact, sharks do have tongues, and it is referred to as the basihyal. Just like humans and other animals have tongues, so is the shark. However, the shark’s tongue does not serve the purpose of what the human tongue can do. You know what your tongue does, right?

The shark’s tongues are small and not flexible, and that is why we hardly see them despite sharks opening their mouths wide. Additionally, their tongues aren’t fluid and lack taste buds as well. Thus, due to all this, the tongue has no use when it comes to feeding. In case you want to locate where the tongue is, you will find it out at the bottom of the shark’s mouth.

Does shark tongue have any benefits?

The Shark’s tongue does not have any role when it comes to feeding; the shark’s powerful jaws and serrated teeth are enough for them to rip their prey and eat. Then what purpose does the tongue serve, and does it have any benefit?

Well, every part of the body has some function to do in one way or another. Scientists believed that the shark’s tongue serves as a protective mechanism, holding the ventral aorta, an important part of its anatomy, in place. In the deep throat of the shark, the ventral aorta is protected from large pieces of food.

To get a better understanding of it, you must know that sharks do not have bones, but they are made of cartilage. Because of this, sharks lack ribs that protect vital organs.

Due to the absence of ribs, the shark’s cartilage extends up to its mouth to protect its gills. Toward the end of this chunk of cartilage, you will find what is known as the shark’s tongue or basihyal.

In some species of sharks, however, the tongue helps in feeding. Factually speaking, there are 3 types of shark species named the carpet shark, bullhead, and the cookiecutter shark, which have different tongues as compared to other species. The basihyal in these species has a rounded, flattened shape and is able to hold prey by suckling it up with the assistance of its neck muscles.

Can sharks stick their tongue out?

Since most shark species’ basihyal is small and unmovable, they cannot stick it out. Since cartilage is the main component of shark tongues, they have little flexibility, preventing them from sticking out.

Sharks are mysterious creatures spread around all major oceans of the world. While we see their teeth from far a distance, it’s hard to see if they have a tongue or not. The study says that sharks do have tongues, and it is called the basihyal. However, their tongue does not have such an active role in hunting or feeding, but it is there to protect the vital organ.