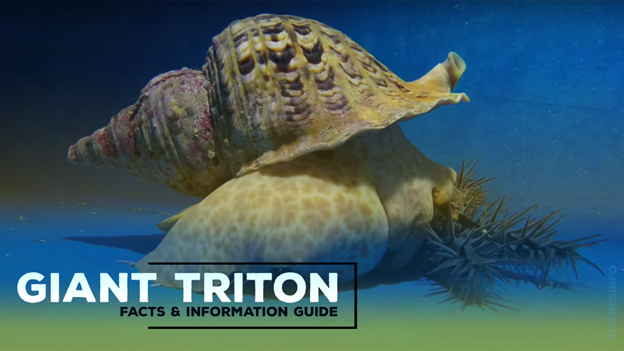 Its beautiful shell makes the giant triton stand out in the Indo-Pacific region. It grows up to 2 feet long and is the largest snail in the seawater. It is also commonly called Triton’s trumpet due to its ability to produce a loud sound like a trumpet. The creatures possess some amazing characteristics that will certainly blow you away. Wants to know more about them? It will be worth your time to read what follows.

The giant triton (Charonia tritonis) is a very large sea snail, an oceanic gastropod mollusk belonging to the family Charoniidae. Sea snails such as these play a crucial role in protecting our reefs-a biodiverse ecosystem. Let’s get to know a bit of detail about this unique sea creature.

Various species of Charonia live in tropical and temperate waters, and talking about the C. tritonis; you will find them mostly in Indo-Pacific Oceans as well as in the Red sea. In the day, these predators hide in rocks and holes, and at night, they feed on prey in their vicinity. By controlling crown-of-thorns starfish populations, the species helps coral reefs remain healthy.

This sea snail is characterized by a large, spindle-shaped shell that tends to be white and yellow/brown in color. They are among the largest molluscan species in the world, with a length of around 2 feet. The snail’s calcium carbonate shell provides a safe dwelling for its colorful, soft body.

Known for their excellent sense of smell, giant tritons are active predators who aggressively chase their prey. Their ability to digest venomous Crown-of-Thorns Starfish makes them famous. In response to the smell of prey, snails immediately chase after it. Using its radula, the marine snail rips through the skin of the starfish to grab its food. Giant Tritons paralyze prey by injecting saliva into the skin and feeding as they wish. In the case of smaller prey, tritons will swallow the entire animal, spitting out unwanted parts afterward.

In giant tritons, sexual reproduction occurs through internal fertilization. Females lay their sticky eggs on the sand, and these are quickly covered with sand and other materials to provide camouflage. It takes three months for larvae to land on the seafloor after they are born in the ocean currents.

Humans pose the greatest threat to giant tritons. It is mainly for their beautiful shells that humans have hunted the species for centuries. Sadly, the triton population has declined significantly as a result of commercial harvesting.

The giant triton is a large, beautiful sea snail that is mainly found in the Indo-Pacific region. An impressive sight, with its massive size and unique features, it is sure to intrigue and amaze anyone who sees it.