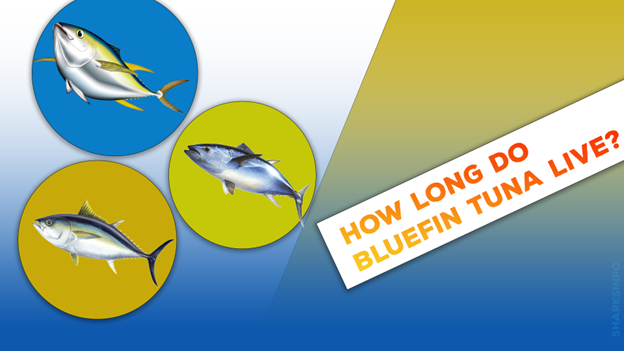 Bluefin tuna are exceptional fish in the marine world and are highly sought after by fishermen due to their large size and delicious flesh. Among many other things, the lifespan of these fish is highly discussed. While these incredible tuna are believed to live for up to 40 years, it does not represent the average life expectancy, and it also differs from the species of Bluefin tuna.

It is easy to identify each species as a Bluefin tuna because of their distinctive blue and black coloring and features, but they also share some common characteristics as well. A Bluefin tuna, for instance, swims fast, dives deep, hunts in schools, and has a highly developed vision. Furthermore, all three species are aggressive predators and carnivores, eating a variety of prey.

Each of these species is a migratory creature, which makes them prone to overfishing. When it comes to how long the Bluefin tuna lives, it can vary as per the species talking about. So, let’s find out about each specimen.

The Atlantic bluefin tuna is a large (in fact, the largest tuna species with an approximate length of 15 feet) and powerful fish that is found in the Atlantic Ocean.

At birth, they are only a few millimeters long, but within 3 to 5 years, they reach sexual maturity at approximately 3 feet in length. The average life expectancy of an Atlantic bluefin tuna is 15 years.

Although these tuna are violent predators, they are also being hunted by whales and sharks. Furthermore, Atlantic bluefin tuna are prized as food fish and are heavily fished all over the world. In the past few years, the species’ populations have dropped steeply, placing them at high risk of extinction.

Pacific bluefin is a species of tuna found in the western and eastern Pacific oceans. It is highly migratory and travels a great distance through the entire Pacific Ocean.

It takes a Pacific bluefin tuna approximately five years to reach maturity, and it can live up to 26 years, but on average, they survive for about 15 years.

They can grow up to 1.5 m in size and weigh up to 60 kg. Nevertheless, 3 meters in length and 450 kilograms are the maximum height and weight reported for Pacific bluefin tuna.

The Pacific bluefin tuna is fished commercially and as well as targeted by recreational anglers. It is also threatened by habitat loss and by incidental capture in fisheries targeting other species.

This tuna is highly migratory and travels long distances across the Atlantic, Pacific, and Indian Oceans. With a torpedo-shaped body, southern tuna can grow as long as 2.45 meters and weigh as much as 260 kilograms. However, on average, they grow to a size of 1.8 meters with a weight of around 100 kg.

It takes bluefin tuna around 12 years to reach reproductive maturity, and they live for about 40 years.

It is a popular species for commercial and recreational fishing and is also affected by environmental impacts. It has led the species to be declared critically endangered.

Bluefin tuna are a fascinating species of fish that are known to live long lives. The average lifespan of a bluefin tuna is between 15 and 30 years, but some individuals have been known to live for up to 40 years. These fish are highly migratory, traveling great distances between their nursing and breeding grounds.