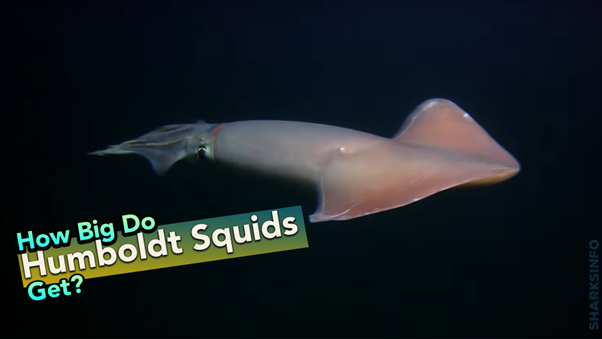 Imagine, you are enjoying yourself on a beach and suddenly you see a giant squid coming out of the ocean, saying Hi to you!

Where In The World Do Humboldt Squids Live?

Well, the Humboldt Squid is common in almost all the oceans and beaches of the world. Butthe hometown of Humboldt Squid is along the shoreline of the Pacific Ocean, New Zealand, the Eastern Coast of the Northern Atlantic Ocean, and the Southern Cost of Africa. The species have rarely been seen in the polar region as well, however, they prefer warm temperate waters but some specimens have been sighted in tropical waters as well.

How Big Do Humboldt Squids Get?

The Humboldt Squid is known to be the most prominent member of the cephalopods. The main body consists of a large cone-shaped mantle of about 4 to 6.5 feet 1.2 meters andweighs measure about 110 pounds or 50 kg. From the mantle, 10 large barbed tentacles appear each bears approximately 100 to 200 suckers which help them in feeding. Further, two wings-like appendages arise from the mantle which helps them to fly in the extended ocean. They have a large pointed razor-like sharp beak that has an extremely powerful biting force enough to kill the prey.

What Does Humboldt Squid Eat?

The largest cephalopod requires a large amount of food to maintain body energy.  They are nocturnal species that hunt actively at night hours. They include:

What Behaviour Do Humboldt Squids Exhibit?

The Humboldt Squid usually have to face a shortage of food which is why sometimes they start feeding on the members of their own family, exhibiting cannibalism. Further, they are active swimmers and can camouflage which helps them to protect themselves from predatory animals and allow them to communicate with each other as well.  The studies suggested that Humboldt Squid exhibit 28 different color and patterns due to the presence of specialized cells called photophores that produces light.

There is no specific information about the reproductive behavior of Humboldt Squid, it is observed that the color-changing capability attracts the mate for courtship. According to an estimate, the female squid can lay more than 20 million eggs each year that have a life span of only 2 years.

Does Humboldt Squid Have Any Predators?

Humboldt Squid is known to be the largest cephalopod living near the floor of the ocean. The species are named Jumbo flying squids as they have 2 wings like appendages that allow them to fly under the water. Moreover, the body is comprised of a large mantle that is 4 to 6.5 feet long and has large extended tentacles which help them in grasping the prey. As they are enormous cephalopods, they feed on almost everything they found in their vicinity to maintain their body weight. If you want to encounter them, then you have to plan a visit to the Pacific Island – the hometown of the Humboldt Squid.