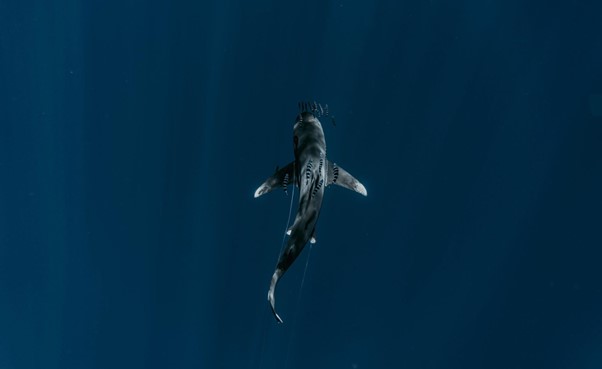 A hungry shark is a skilled predator!

If you ever wonder how long can a shark survive without food then you are not alone, this question intrigue many people because we have always heard that sharks are the apex predator of the ecosystem, they as a group feed on almost everything such as crustaceans, fishes, mollusks, marine mammals, seals, dolphins, sea lions and other sharks. Is it really possible that they will survive without eating anything?

We all know that sharks have been living in the ocean water for a long time, they undergo many adaptations which help them out to live for a longer period of time. During this time zone, they have adapted multiple feeding mechanisms to survive in the changing environmental conditions – one of which is living without eating for so long.  We are therefore here to flutter your curiosity and make you understand the reasons behind this exceptional feeding behaviour of sharks!

Are you ready to drool into the details regarding their unique feeding actions? Let’s go then!

How long can a shark go without eating?

According to the studies conducted on various feeding mechanisms of sharks, it has been reported that sharks can live for approximately 6 to 8 weeks without eating anything. Indeed it’s a long time span! However, few species such as Swell sharks show remarkable behaviour of living for 15 months or even more without eating! Interestingly, this behaviour is beneficial for sharks as the longer they live without food, the more they sharpen their hunting abilities! Amazing!

How do they manage to live so long without feeding?

Sharks are cold blooded animals which burn their energy at much slower rate as compared to humans so they do not require much food to eat. Moreover, sharks store large amounts of oil in their liver after eating which helps them to survive and if the oil runs out then they search for food to eat. In the past, some species of sharks such as six gills sharks can even live for years without eating but due to changing environmental conditions, the modern day sharks can only survive 6 to 8 weeks without eating anything.

Are sharks capable of surviving a year without eating?

What quantity of food does a shark require to live?

Sharks are not a continuous feeder, they eat only 1 or 2 meals after two to three days in a week. They usually eat 0.5 to 0.3% of their total body weight because they cannot chew their food well, so they first properly digest the food then search for the next meal. This is because they have a slower metabolic process than the other marine mammals.

Sharks are the top hunters of the ocean waters, just like human beings – they do not need to eat continuously. They adapt various feeding mechanisms which help them in surviving the changing environmental and climatic conditions. They can stay alive for weeks, months or sometimes even years without eating anything because they have slow metabolic rate, first they need to digest the food completely and then look for another meal. That’s why they are capable of storing large amounts of energy in their bodies, which keep them alive without eating anything for such a long period of time!