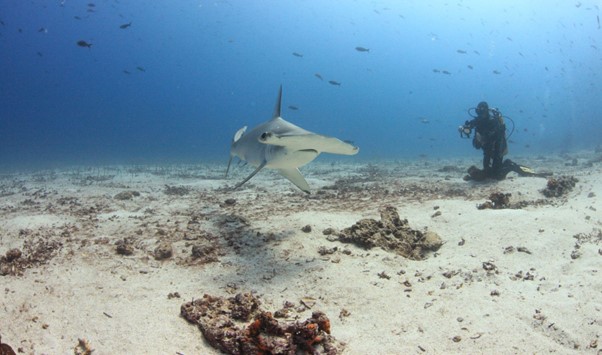 The Hammerhead sharks! Got the name because of its hammer or shovel shaped head!

All sharks are different from each other on the basis of different physical features, the most unusual species of sharks is the Hammerhead shark and can be identified easily due to its extended hammer-like head. The species are distributed in the warm waters of temperate and tropical regions near the coastal areas. There are only 9 species of Hammerhead sharks which differ only on their physical appearance.

Let’s explore more about the species of Hammerhead which varies in size!

Who are Hammerhead Sharks?

The species lives in the coastal regions at a depth of about 80 metre. They are mostly travellers and are capable of covering the longest distance of 756 miles all alone and are known to migrate to colder regions during the summer season! Amazing! They are nocturnal – active at night! The hammerhead sharks feed on a variety of dietary items such as small fishes, octopus, stingrays, crustaceans and squids, they are solitary predators that roam in the ocean water for the search of food – the odd shaped head helps them in hunting the prey. Hammerhead sharks are viviparous and give birth to only 12 to 15 young during the breeding season. The life expectancy of a Hammerhead shark is 20 to 30 years. Some species of Hammerhead sharks tend to eat their own babies when they feel hungry! Cannibalistic behaviour!

How big are the Hammerhead Sharks?

Hammerhead sharks are the top hunters of the sea water, the size of the unique creature varies from 3 feet to 20 feet in length and weigh around 500 to 1000 pounds. The female species are larger in size than the male sharks. The adult females have an average length of 15.8 to 18 feet and the adult males are about 12 feet in length. The length of a newly born baby shark ranges from 1.6 to 2.3 feet.

For your ease, we are going to explain species of Hammerhead sharks on the basis of their size, so that you can easily understand them!

The largest species of the hammerhead family is the Great Hammerhead shark with the maximum length of sharks is 20 feet but the average length is 12 feet. They have a small mark in the centre, on the extended head which distinguishes them from others.

The second largest species of the Hammerhead family is the Smooth Hammerhead shark that has an average length of 13 feet. The species do have the extended head but without any mark

The third large size species of hammerhead family that can have a maximum length of 13 feet. They have narrow blades with a small notch on the edge of the head that make them different from the other species.

They are also named as mallet heads that have an average length of 3 feet or 1 metre only. The shape of their head is quite rounded – like a mallet!

The other name of these species is slender hammerhead that has a length of 6 feet with a large and wing-like head along with narrow head.

The shark’s species can grow to an average length of 5 feet or 1.5 metres. They have broad heads with shallow appendages.

The Bonnet-head shark can grow to a maximum length of 5 feet pot 1.5 metres, they have a shovel shaped narrow head which makes them different from other species.

These sharks have an average length of 5 feet or 1.5 metres, they have arched, broad, and mallet shaped heads with deeply enrooted indentations.

These sharks can grow to a maximum length of 9 feet or 2.7 metres. The head has a broad head with narrow edges.