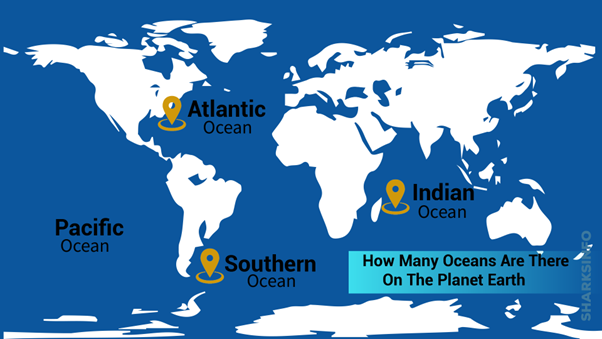 Southern Ocean is a new name for the Antarctic Ocean newly included by the US and some other countries.

The Five Oceans On the Planet Earth

According to the National Oceanic and Atmospheric Administration (NOAA), there is only one global ocean, and this one ocean is further subdivided into five more oceans. Many animals, as well as plants, also live in this ocean.

The Arctic Ocean is the smallest ocean covering an area of 5,430,000 sq miles- among all oceans and also the shallowest one too. Its depth is almost 18456 feet. It is present at the north pole and the temperature is freezing over there so few animals live there. Banded gunnel and lion mane jellyfish are a few animals that live there.

It is considered to be the second largest ocean with a surface area of 41,100,000 sq miles and an approx depth of 3646 miles. This ocean specifically surrounds the Atlantic to the north side. In the west, North and South America are found; Asia and Africa are present towards the east. Many aquatic animals like whales, dolphins, and turtles live in the Atlantic Ocean.

It is said to be the largest and deepest of the five oceans. It covers around sixty 63,800,00 sq miles. This big ocean borders many countries; the US, and China, and on the west, it borders Australia and South China. The water in the Pacific is warmer and in the Atlantic Ocean, it is cooler. There are many sea life animals that live in the Pacific Ocean- tuna, salmon, snapper, and many other aquatic animals.

It is said to be the third-largest ocean with an area of 27,240,000 sq mi and an average depth of 1,274 feet. On the west of the ocean, Africa is present and on the east it’s Australia. Many people do fishing here, tuna and shrimps are famous edibles of fishermen.

5: The Antarctic or the Southern Ocean

It is present in the southern region as its name indicates; its previous name was the Antarctic Ocean but now it is called the Southern Ocean. It covers almost 7,848,295 sq miles and its depth is almost 16000 feet. The Southern Ocean has fresh water. It borders Chile, Australia, and South Africa. The temperature is really low- it is freezing.

Our earth has one interconnected ocean as a whole and that ocean is further subdivided into five oceans. All those oceans have marine life in them, and people like to travel in ships and boats and even they prefer scuba diving if the water condition is top-notch and there are no apparent perilous animals to be attacked by.

1: Name the famous ocean that is said to be the largest ocean present on our planet?

The Pacific Ocean with a surface area of 63,800,00 sq miles is considered to be the largest ocean in the world.

2: Name the ocean that is said to be the deepest one?

With an average depth of 14,040 feet, the Pacific Ocean is considered the deepest ocean in the world.

3: Pen down the smallest ocean on the planet Earth?

The title of the smallest ocean in the world has been given to the Arctic Ocean with a surface area of 5,430,000 sq miles which is also famous for being the coldest ocean as well.

4: Deepest part of the ocean is where?

Located at the Mariana Trench’s southern end in the west Pacific Ocean, Challenger deep is located at the depth of 35,678 feet, which is the deepest point of the ocean recorded to date.