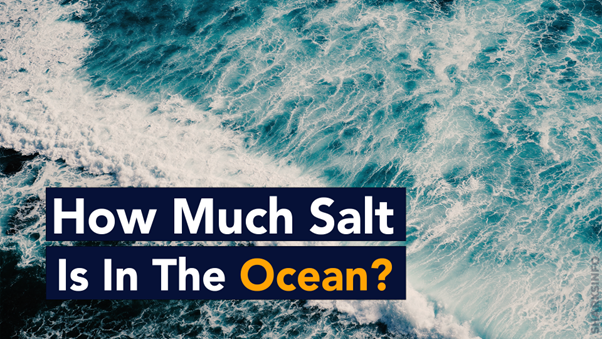 Have you ever tasted seawater? How it tastes? Salty. Right! Sea water is a collective term for the water in the sea or oceans. Mostly the water present in the oceans is due to the presence of certain compounds, However, this doesn’t mean that all the oceans of the world have the same amount of saltiness, one ocean may be saltier than the other, depending upon the number of dissolved substances in it. Many factors are responsible for the saltiness of the ocean. Let’s see how much salt is present in the oceans and the reason behind its saltiness. Scroll down!

How Much Salt Is In The Ocean?

Why The Ocean Water Contain So Much Salt?

The saltiness of ocean water is due to the deposition of salt and dissolved minerals at the depth of the ocean. The ocean water contains a high concentration of table salt – Sodium chloride which makes up about 90% of the salt water, along with essential minerals such as potassium, magnesium, and calcium. Over time, the salts and minerals deposit on the ocean floor or dissolved in the water, making it saltier.

Does Salt Concentration Remain Constant In The Ocean?

No! the concentration of salt doesn’t remain the same with time. This is because new salts have been added to the oceans with time from the surface to the floor of the ocean, which deposits there for millions of years. Even if the water in the ocean evaporates from heat or other environmental changes, the salt remains deposited on the ocean floor.

How Salt Enters The Ocean?

The salts are cyclically added to the ocean water – from land, it enters the river water, which ends up in the sea and then to its destination – the ocean water.

How The Salt Enters The Oceans?

When it rains on the land, the rainwater contains a certain amount of dissolved carbon dioxide, which makes the rainwater a bit acidic due to the presence of carbonic acid – carbon dioxide is converted to carbonic acid. The acidic water then erodes the rocks and breaks them chemically, carrying the salts in the form of ions. These ions flow then towards the river water, to the sea, and then finally to the ocean, where the concentration increases over time.

Which Is The Saltiest And Least Saline Ocean In The World?

According to the studies conducted on the salinity of the ocean, the saltier ocean, out of the 5 biggest oceans of the world is The Atlantic Ocean, this is because of the high rate of evaporation. In comparison, The Arctic Ocean is the least saline ocean in the world.

What Happens If Salt Is Removed From The Oceans?

As we all know that for a million years salt has been deposited on the floor of the ocean which forms about 500 feet or 166 meters thick layer. If the salt is removed from the ocean then it will result in pressing the seabed which will affect marine life greatly. Moreover, it will also be triggering volcanos and earthquakes all over the globe – disturbing the overall equilibrium of nature.

About 90% of the water on the Earth is saline out of which 70% makes up the ocean water bodies. The reason behind the salinity of ocean water is the accumulation of salt, especially Sodium chloride and other dissolved minerals such as magnesium, potassium, and calcium, which make it saline. Approximately, 50 quintillion kg of salt is found in the ocean and the concentration continues to increase with time. If this salt is removed from the, it may disturb the life under the water or may trigger volcanic eruptions and earthquakes – disturbing the balance of nature.