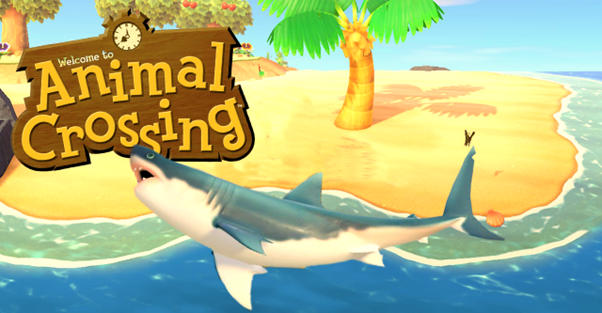 What is Animal Crossing?

It is a kind of simulation video game developed by Nintendo. Its main character is a human who decides to live in a village/island that is full of a variety of animals. He/she needs to perform various activities like fossil hunting, bug catching, and fishing to survive. There are some other characters as well in the game that add life to the game and support the player as well.

The most common thing a human character does is fishing. Every fish gets sold for a few bells. To get more bells (that is a kind of coin in the game), he/she needs to catch a bigger fish or a shark. However, catching a shark is not an easy task as it requires lots of practice, patience, and observance. Let’s see how many sharks are there in this game and how to catch them.

How many sharks are there in Animal Crossing-New Horizons?

You cannot find each and every type of shark in this game but four of them. These sharks can only be caught during specific times of the year and the day. Their availability in both Northern and Southern Hemispheres also varies. The following table shows their availability season along with the timing of the day.

How to catch sharks in animal crossing?

If you are here then you must already be familiar with the game but might be facing difficulty in catching sharks. Follow these steps to make sure to get a shark in your net.

To catch a shark, like any other fish you’ll have to throw bait in the water. The game has already taught you that fishes and sharks love Manila Clams, so first go find these out by shoveling the sand on the beach. After collecting enough, choose from the fish bait recipe and craft it accordingly.

You cannot just randomly throw bait in the ocean. You need to carefully decide on a perfect location  that could be a shore pier. You need to go to the shore pier between 4 pm and 9 am. This time and location serve best for the purpose of shark catches. You also need to make yourself familiar with which shark will possibly be in the waters based on the season.

Take a walk along the shore and keep an eye on the ocean. Now, throw the fish bait in the ocean. If you start catching small fish, you can throw a large bait. After throwing bait, keep waiting for the shark’s shadow.

Once you observe the shadow of the shark or a fin punning out of the ocean, make sure to cast your line by pressing the action button. The tip is to make sure that the bobber lands right before the shark. As soon as the shark will nibble it, your controller will start vibrating intensely. To get the shark, press the action button again.

Once you catch the shark, it’ll land right in your hands so the game can showcase your catch. The most common thing is to trade these sharks for bells, in other words, money in the game.

How many bells are sharks worth?

You can better guess the bigger the fish, the bigger the amount. And if you talk about sharks, they’ll surely get you some handsome amount. Let’s take a look at each shark and how many bells it can get you.

Catching a shark is not as simple as catching fish. If you are planning to catch one, you should have tons of patience which will let you practice a lot on how to catch the desired shark. That’s why it’s best to keep visiting shore often to observe the pattern of sharks’ appearance in the ocean. Keep an eye on the shadows to make sure you are catching the right one. Notice the amount of bait that works. Try again and again and do not get impatient as valuable things take time.

Animal Crossing lets you enjoy an almost real-life experience of catching different animals and life on an island. Catching a shark in real life might stay a dream for you, but by following the above steps, you can definitely catch a shark in Animal Crossing and flaunt it.