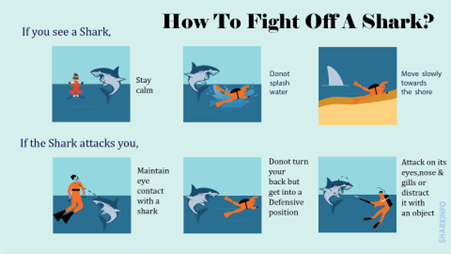 Sharks are the predatory apex hunters of aquatic as well as marine ecosystems. Sharks have always been portrayed as bloodthirsty and fearsome killing machines. But that’s not true, only a few species of sharks such as Bull sharks or Tiger sharks are famous for their aggressive nature while the rest of the shark species live peacefully until or unless provoked.

Just for an instance, imagine a situation where a shark attacks you, what would you do? How would you protect yourself from a shark’s attack? Scroll down to learn the defense strategies to fight off the attack of sharks.

How To Fight Off A Shark?

In an extended ocean, there are high chances that you might interact with sharks. Although sharks rarely attack humans, if you accidentally get into such a situation, then follow the following tips to fight off the shark’s attack.

1:  Avoid swimming early in the morning or late at night because these are the two favorite time zones for sharks to wander in the middle of the ocean or near the shoreline.

2:  If you are in the middle of the ocean and suddenly you found a shark circling you – don’t panic and stay calm.

3:  Try to keep eye contact with sharks, confront them with eyes, and show them that you are a predator, not a prey.

4:  Try to move slowly towards the boat or shoreline and avoid splashing water.

5:  Do not turn your back or block the path of the shark and try to get into the defensive position as fast as you can.

6:  Unfortunately, if a shark attacks you then it’s time to fight back and hit them on the sensitive part such as the face, eyes, nose, and gills.

7:  If you forgot to take a defense weapon with you then use inanimate objects such as a rock to distract the shark.

8:  If a shark attacks you then rather than playing dead fight back to save yourself.

9:  If a shark bit your arm then keep it over your head and try to come out of the water as soon as possible.

10:  If you sustain any wound, get medication to stop bleeding as soon as possible. If the injuries are severe then rush to the hospital for treatment.

Despite being aggressive species, sharks live peacefully in the oceans and avoid human interaction. But once you enter their homeland you are at risk of getting attacked by sharks. If this happens, remember all the defense strategies to distract sharks, or else prepare yourself for an accidental attack. If you are a deep-sea diver, then swim smartly or responsibly, and remember that you are in the shark’s hometown.