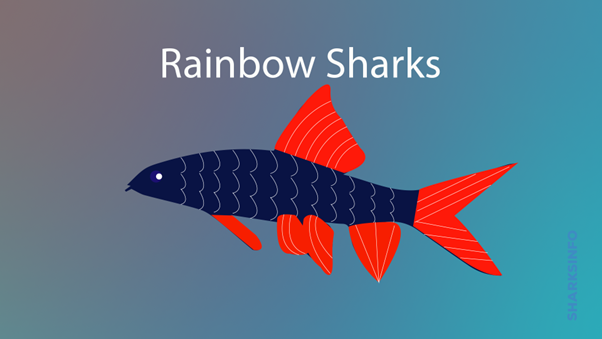 Rainbow sharks, scientifically named Epalzeorhynchos frenatum belong to the family Cyprinidae. The Rainbow Sharks are freshwater fishes, not true sharks, they are called so because their triangular dorsal fins and slender body shape look exactly like sharks. Let’s take a deep analysis to learn more about the living habitat, feeding, and breeding parameters of Rainbow sharks.

What Habitat Do Rainbow Sharks Prefer?

Rainbow sharks prefer a sandy environment near the ocean floor, in the open waters of Southeast Asia, Thailand, Malaysia, Myanmar, Laos, Mekong, and Maeklong in Indochina. These species exhibit migratory behavior when the monsoon season arrives and when the flood dries up, they return to their native habitat.

What Is The Physical Appearance Of Rainbow Sharks?

Red sharks gain people’s attention due to their unique red-colored fins which stand out vividly from their dark-colored bodies. Sometimes the color of the fins takes on an orange hue as well. They have black to greyish-colored long and sleek bodies. They have 7 pairs of fins which give them a small arrow-like appearance. The Rainbow sharks are about 6 inches in length and are expected to live for about 5 to 8 years.

Rainbow sharks are bottom feeders because they found abundant food items near the floor of the ocean. They are omnivorous species that include the following items in their menu:

What Is The Conservational Status Of Rainbow Sharks?

The Rainbow sharks are listed Least Concern in the Red list of IUCN. The population of sharks is decreasing because of the destruction of habitat and overfishing in a wild habitat. These species are caught for displaying in the aquarium, where they cannot reproduce as a result the sharks are disappearing from the ocean waters.

Rainbow sharks look quite different from the other species of sharks because of their red-colored fins against the black greyish bodies. The Rainbow sharks are not true sharks, they are freshwater fish which has a slender body and triangular-shaped dorsal fins which looks exactly like sharks – that is why they are named Rainbow sharks. These sharks are the most popular species in the aquarium but they require special tank conditions to live in captivity. In wild, they live peacefully and calmly with other fishes but in captivity, they show extreme aggressive behavior towards the other tank mates.