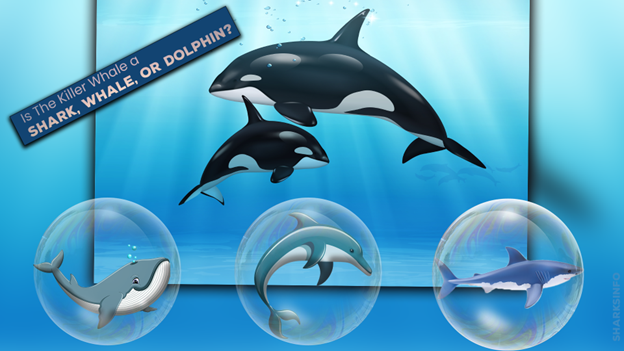 Killer Whales or Orcas are very intelligent mammals and extremely fast swimmers who swim at the speed of 54 kph. Along with these specialties, they are super easy to be recognized because of their separate shades of the body. The upper body or dorsal side is jet black in color, while the lower body or ventral side is totally white in color.

By keeping the huge size of these killer whales in view, these marine species are assumed to be part of the whale family, while their hunting skills can easily put them on the list of sharks. In reality, killer whales are neither sharks nor whales. They essentially fit in to the family of Dolphins and are the largest member of this family.

Why is the Killer Whale misinterpreted as a shark?

Killer whales and sharks both have earned their seats on top of the list of the best predators and hunt almost the same kinds of species that, include fish, sea lions, other sharks, and even whales. This is the key reason why people in the past considered them sharks.

The other differences include the bigger size of a killer whale than a shark, more intelligence in the killer whale, and less hungriness in a shark. Moreover, they both have quite different ways of breathing and different kinds of teeth. Sharks are cold-blooded animals and consist of cartilaginous skeletons, while killer whales, just like humans, are warm-blooded species with a completely bony skeletons.

Why is Killer Whale a Dolphin and not a Whale?

Being bigger in size and named a killer whale and not a killer dolphin makes people confused with the whale and the killer whale. In the old times, the sailors gave the name of a killer whale to this fish because this fish was highly proficient in hunting and preying on large whales.

Similar to dolphins, killer whales have some extraordinary hunting capabilities that make them capable of switching to exclusive hunting techniques that are according to the situation. They both are equipped with echolocation and use it to trace their prey and communicate with each other when the visuals are weak.

Echolocation is the key feature of the dolphin family, which makes them unique from others. Echolocation occurs through the melon, which is a bulbous formation on top of the head of both dolphins and killer whales. The melon is comprised of fat and connective tissues, which are highly efficient in conducting high-frequency sound waves, and they instantly project them into the water to locate the prey and communicate with their partners.

Because of the name, huge size, and exceptional predating skills, killer whales are often confused with sharks and whales, while in reality, they are the true member of the family of dolphins. But there is a plenty number of differences that separates them from a shark and a whale, including anatomical, taxonomical, physiological, and social-behavioral differences. Although it is quite confusing, it is still whale-y exceptional and dolphin-ately enthralling.