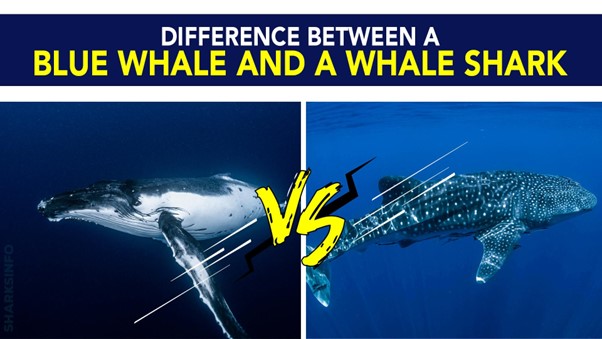 There is always confusion between whale sharks and blue whales, though the two are completely different species, people often mix them due to their names. Let’s have in-depth look at the differences that these two species have, which make them distinct from eachother.

Blue whales are the largest mammals that have ever lived in the oceans of the planet earth. These enormous marine monsters command the waves with lengths of up to 100 feet and weights of up to 200 tonnes.

A school bus-sized whale shark swims gently toward the ocean’s surface. Its large mouth is open, taking up anything that happens to be nearby—mostly small fish, fish eggs, and plants. As the world’s largest fish, a whale shark must travel approximately 5,000 miles each year to obtain enough food.

Difference Between A Blue Whale And A Whale Shark

Some other differences between a blue whale and a whale shark are listed below.

Whale sharks can reach lengths of over 40 feet and weights over 47,000 pounds. The largest variety of whales, the blue whale, may grow to be 98 feet long and weigh 40.000 pounds.

Blue whales can be black, blue, or grey. Their skin is hair-covered. Whales are known to possess a thick layer of blubber under their skin that keeps their body temperature stable in frigid water.

The back of a whale shark is grey, with pale yellow dots, while the belly is white. It has dermal denticles on its skin. Because whale sharks are cold-blooded, they lack an insulating layer of blubber beneath their skin.

The whale shark lacks baleen plates. It has a large mouth with 300 to 350 rows of tiny teeth along with around 10 filter pads for filtering food from the water.

The whale shark spends its entire existence below and breathes with five pairs of gills. Whales use their well-developed lungs to breathe atmospheric air. They frequently swim to the water’s surface to keep on providing their lungs with oxygen.

Fish, according to scientists, has been around in the oceans of the world for about 400 million years. Blue whales have existed on our planet for around 55 million years. This implies that sharks are far older than whales.

Blue Whales have a single baby every few years. The infant stays with its mother during nursing and until it is ready to live on its own.

A blue whale is a mammal and is a fish while a whale shark belongs to the sharks and has a cartilaginous skeleton, not a bony skeleton like the blue whale. Both species are different in terms of appearance, size, habitat, diet, skeleton, reproduction, and lifespan. All the above-mentioned differences are enough to tell them apart.