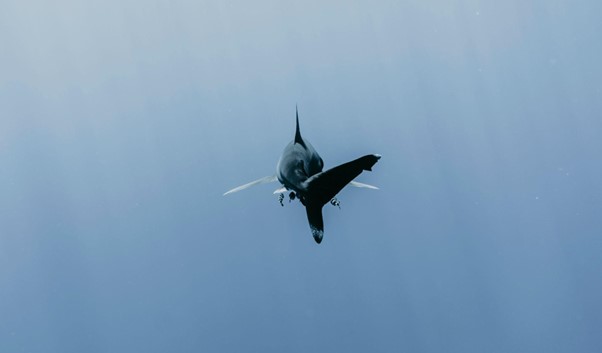 What attracts sharks the most? If you ask this question to anybody you will 90 % get the answer – blood! People always described sharks as the bloodthirsty man eater giant creature of the ocean – credit goes to social media, movies and shark documentaries! But that’s not the truth!

Although sharks are attracted to blood, there are certain other things that attract sharks as well! Move on to find out about the mysterious gadgets that fascinate the sharks!! Let’s begin!

What attracts sharks the most?

To avoid any incident, there are several things you should know that appeals to sharks the most while swimming in the ocean water! Here we go!

Sharks can smell a single drop of blood in the water miles away from them – well that’s not true but yes sharks are blessed with a very strong sense of smell, they can smell the scent of blood molecules in the water and get attracted towards it. Not just the blood, any of the body fluid that may attract the sharks!

Warning: Though sharks do not like human blood but it is highly recommended that if you bleed, avoid visiting the oceans or diving into the deep water!

Food is a basic necessity for every living being either on the land or deep in the water. Sharks are also magnetized towards the smell of the food. Many people use chums (the chunks of food) or bloody parts of the fishes as bait to attract sharks by throwing the rope tied with their favorite prey. Moreover, the water creatures such as turtles or fishes attract the sharks! How foodie they are!

Yellow! The appealing color of the Great White sharks!

However, the dark and muted colors are least appealing to sharks such as black and brown are not visible to them underwater.

If you don’t want to attract sharks while enjoying the ocean water then you should avoid wearing silver jewelry or precious metals – it attracts the sharks because it looks like the shiny scales of a fish to sharks and other predators of the oceans! Don’t risk your life!

Despite having a good sense of smell, sharks follow the sound more to travel in the oceans. Sound made by splashing of water, swimmers in trouble or injured fishes attract sharks more than the smell of the prey.

The lowest sound frequency of 10 to 50 hertz and the highest sound frequency up to 800 hertz can be detected by sharks. Sharks possess lateral line organs and inner ear which helps them to detect the sound made by their prey at an average distance of 250 meters or even more.

Like humans sharks are also attracted to certain things such as the blood, food, specific colors, the particular movement of the prey and the sound! That’s why it has always been recommended that if you are bleeding or wearing any jewelry while planning to go diving, cancel your plans or place your objects aside, otherwise sharks will welcome you with the bites in their homeland!