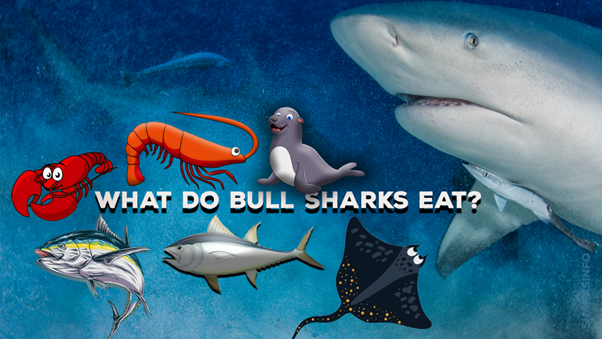 One of the most popular- leading sharks present on the globe; having a 6000-newton bite force… considered to be the strongest chomp. It has a strong jaw; big, pointed teeth and it is one of the blood-thirsty sharks that normally attack humans and likes to ingest them. Do you know what other food Bull sharks like to ingest? Let’s take a look.

Bull sharks are known to be carnivorous; whatever they put their eyes on- they hunt that animal and devour it. Humans are also on this shark’s meal list. This shark can also be omnivorous as it does eat a few plants and algae. Famous for being aggressive predators. It often loses its teeth in biting each time it hunts its prey. The shark’s old teeth are replaced by new ones, and this is a weird fact as these sharks bite with tremendous strength.

Bull Sharks- What Do They Eat And How They Chase- Hunt?

The teeth of this animal are strong and pointed. It helps to grab and snatch their prey away. Bull sharks are carnivorous, aggressive, and agile predators- it fully devours its prey… It is focused on the animals it would prefer to ingest and it hunts- attacks like most sharks do and consumes its meal.  Some animals that shark prefer are:

Sharks do have this tendency to eat up to 3% of the body weight. They eat 3-4 times per week. Normally bull sharks weigh upto hundred pounds after they are fully developed.

Bull sharks being carnivorous are considered to be baneful as they attack and eat up whatever it finds… It also consumes humans and is not a friendly animal. They have the most powerful bite among sharks- even if they lose their own teeth. It usually hunts alone and is lethal and has no compassion- empathy. Great Whites, Tiger, and Bull sharks are the most blood-thirsty, aggressive ones who attack humans and are menacing too.