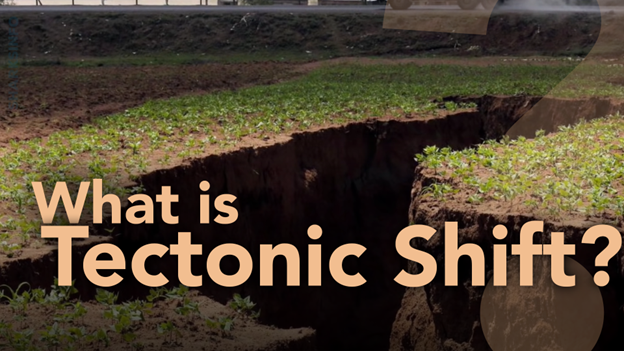 Although we might expect the Earth to be a single solid sphere moving throughout space, it is actually much different. There is more to the surface of the Earth than meets the eye. The Earth’s surface, which is called the lithosphere, is made up of moving layers whose movement depends on a wide number of factors. In this article, we’ll be discussing tectonic shifts while shedding light on the topic of tectonic plates.

Our Earth is constantly changing; the Earth has a lot of things today that it did not have millions of years ago. The tectonic plates are a part of these constant changes that the Earth is going through. In order to understand the tectonic shift, tectonic plates, and the role they play today, we must know the background of how they reached the stage where they are at today.

About 250 million years back, there was only one continent, and it was called Pangea. The remaining area of the Earth’s crust was covered in one ocean only, and it was called Panthalassa. As the evolution of the Earth began, the mantle of the Earth went through many stages. During some time periods, the Earth’s mantle went through extreme heat while it had to go through extreme cold at other times. Due to this, the Earth’s crust broke up into several layers. Thus began the process of the tectonic shift we see today.

A tectonic shift has ever since had a variety of impacts. The huge continent that the Earth had once broken into a number of diverse portions. This began the constant change that we see today, forming a wide number of land masses and oceans. If you look at the map of the east coast of South America and the west coast of Africa, you would see that they fit perfectly before the tectonic shift separated them and pulled them apart from each other.

How Does Tectonic Shift Work? What are the Effects?

Tectonic shift, as mentioned above, is the movement of the tectonic plates as these are not fixed in place. The movement has been constant throughout, but we don’t feel it too often because the movements are not always gigantic. The effects of a tectonic shift, however, are felt very often in the form of tsunamis and earthquakes. The tectonic shift also causes volcanoes to erupt in ancient mountain ranges.

As the tectonic plates rub with each other constantly, enormous amounts of energy are released, and their effects can be seen in the ways mentioned above. A tectonic shift is not always the plates rubbing against each other. Because they are not fixed, the tectonic plates may pass over or above each other, which causes the effects and repercussions to be even worse.

Tectonic shift throughout the millions of years has changed global ocean currents and caused a massive change in the climate. Ever since North and South America connected and the Australian continent separated from Antarctica, the Earth has seen warmer temperatures due to the melted glaciers. As an outcome of this, sea levels have risen.

The most common effect of tectonic shift that we see today is an earthquake. Minor ones can be an annoyance at best, but worse, earthquakes can cause catastrophic damage. When the tectonic plates are on the move, they will definitely collide with one another, or they may move away even further. When they collide, earthquakes occur.

As tectonic plates violently collide with each other, we feel the Earth shuddering violently beneath us. This can cause severe infrastructural damage and can be deadly. Earthquakes can be of varying magnitudes and are measured with the help of extremely sensitive global detectors that use the Richter scale. Richter scales give an indication of how severe the tectonic shift that caused the Earthquake was.

As far as Tsunamis are concerned, tectonic activity causes great changes. When there is a tectonic shift happening beneath the sea, new gaps may be formed on the surface of the Earth. As these may be in the sea, sweater rushes to fill the gaps, and water activity is disturbed. Sometimes, when underwater volcanoes are formed, seawater moves in gigantic amounts, which leads to extremely severe and deadly disasters. One of these happened back in 2011 in the Tohoku Earthquake and Tsunami.

As mentioned above, the tectonic plates constantly move on, over, and around each other. Because the movement is not fixed, collisions of different magnitudes may happen. This seems terrifying considering that the crust of the Earth has layers that are constantly colliding with each other, but it is actually good news and indicates that our Earth is going through changes that it needs to go through.

There are about 12 major tectonic plates and a lot of other minor ones. The locations where these tectonic plates usually collide are at major risk of earthquakes and tsunamis. Some areas, however, are tectonically stable or relatively inactive areas. The “fault lines,” however, are the key areas of tectonic activity and where it is felt most commonly. This is the reason it may feel like some places don’t have tectonic activity. The conclusion is that they actually do, but it’s in negligible magnitudes.

While there is no bad news for at least a few hundred million years, tectonic plates may not necessarily last forever. Scientists believe that tectonic activity might completely stop in some 1.45 billion years, which would definitely render our Earth to become an inhabitable place. For now, though, there is very little chance the tectonic activity will greatly change. So, the plates, for at least 1.45 billion years, will constantly keep on colliding with each other to make the geological engine of the Earth work.