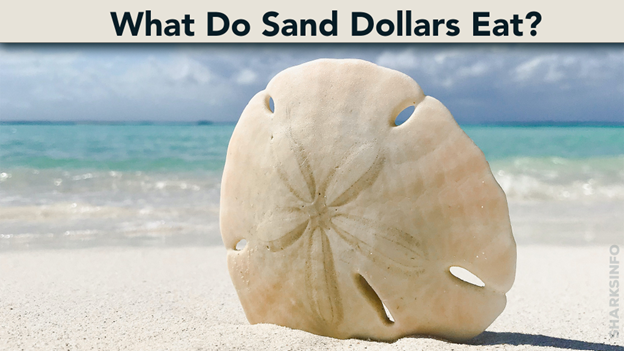 The sand dollar is an interesting creature because it is a type of sea urchin that can be found on beaches around the world. They are typically white or grey in color and have a hard, round body. Cake urchin is another name for the species. As intriguing as it seems, it makes people wonder what sand dollars eat.

What does a sand dollar eat?

People have often wondered about this. Sand dollars are scavengers and feed on a variety of things, including detritus (dead plant and animal material), algae, and other small invertebrates. They are also known to scavenge on lobster and crab carcasses. This makes them a significant part of the food chain in marine ecosystems.

It is possible for sand dollars to eat larvae of their own species on occasion. In the mouth of a sand dollar, there are five rows of teeth that resemble rows of barbs.

When swallowing food, it may chew it for up to 15 minutes. The digestion of their food takes, on average, 48 hours.

What do sand dollars eat in captivity?

An aquarium with a saltwater environment does not need to be hand-fed since sand dollars will naturally feed on fish waste, tiny invertebrates, plankton, and algae. A diet of brine shrimp, krill, and other small crustaceans can also be provided.

In order for sand dollars to flourish, they should be placed in a tank that has had time to establish and accumulate debris. In a fresh tank, there may be insufficient particulate matter for the species to grow.

It’s important that we also discuss the habitat of the species as it directly impacts their diet.

Throughout the world’s oceans, sand dollars live mostly in groups on the sandy sea floors, where they burrow into the sand. There have been finds of sand dollars down to a depth of 90 meters. These organisms are truly marvels of nature, capable of adapting to new environments and filtering their food at the microscopic level.

Generally speaking, most sand dollars feed on plankton, small pieces of organic matter, and even other small aquatic organisms such as crustaceans or worms. Sand dollars use their specialized mouthparts to drill through the sand and capture their prey. These small creatures play an important role in the sand dollar ecosystem and help to keep the sand clean and free of debris.