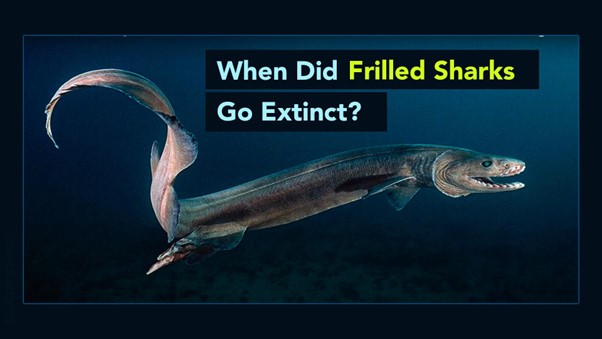 Frilled shark, has a  fascinating shark body that resembles that of a massive snake, and its mouth is packed with toothy protrusions. Despite its distinct appearance and traits, however, nothing is known about the species. People still believe that frilled sharks have gone extinct, but what’s the truth? Are frilled sharks extinct or not? Let’s find out.

Frilled sharks are long and slender, with an extended tail fin that gives them an eel-like appearance. They have a caudal fin without a lower lobe, as well as a small single dorsal fin with six pairs of arched gill slits (most sharks have five gills). These sharks can open their jaws very wide due to their short snout and long lower jaw. A trident-shaped jaw features 300 needle-shaped teeth on each side and two cusplets.

Where Do Frilled Sharks Live?

Although the Frilled shark has a nearly global range, it has a relatively uneven distribution. Populations can be found along the coasts of Norway, northern Scotland, and western Ireland, as well as far south as northern Namibia.

When Were Frilled Sharks First Discovered?

Between 1879 to 1881, German ichthyologist Ludwig Doderlein found frilled sharks. However, his manuscript was destroyed, and the description of frilled sharks was later published by an American naturalist Samuel Garman in his book “An Extraordinary Shark” in 1884.

When Did Frilled Sharks Go Extinct?

Frilled sharks never went extinct, but they have been considered a living fossil due to their family lineage dating back to the Carboniferous period. They live in the depths of the water, thus they are rarely seen by human eyes, but they are still there in the ocean. A few years back, a specimen of a Frilled shark was spotted in the oceans of Japan, and since then, the interest in frilled sharks has been raised among people.

Learn more about the number of frilled sharks left, here.

How Do Frilled Sharks Maintain Their Population?

Because frilled sharks are so scarce in the wild, little is known about their reproduction. Frilled sharks probably reproduce by internal fertilization and give birth to live young. They do not, however, attach to their young via a placenta, as do most mammals. Instead, embryos get their energy from yolk sacs, and the mother only gives birth to her young when the juveniles can survive on their own.

What Is The Conservation Status Of Frilled Sharks?

Little is known about frilled shark population trends, however, they are rarely met by humans and are most likely naturally scarce. They are mistakenly caught as bycatch in fisheries targeting other species in some regions, and in these circumstances, they may be retained and utilized as food. There are no fisheries that particularly target frilled sharks. Because of their natural scarcity and occasional capture in select fisheries, experts believe the frilled shark is ‘near threatened’ with extinction.

Frilled sharks are not extinct, but they are 80 million years old species, residing in the depths of the ocean, and are rarely encountered by humans. However, unintentional human activities and natural scarcity is causing a decline in the number of frilled sharks, that’s why they are listed as a near-threatened species.