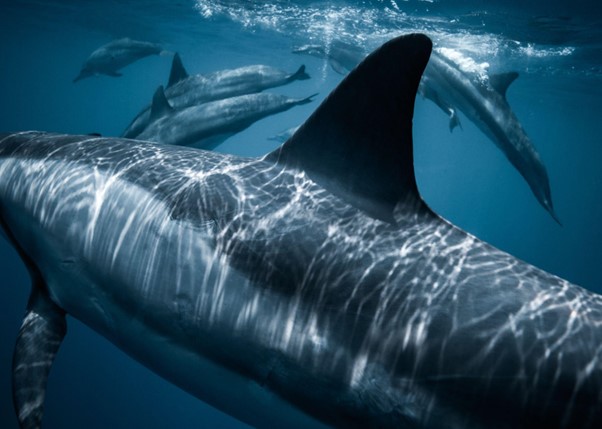 Do youknow when sharks first landed on the Earth? if we know this then why are we reading the article? That’s right – during the Late Ordovician Period, about 450 million years ago. Sharks belong to the class of Condrichthyes – the cartilaginous fishes, the fossil records of these creatures’ shows that they are even older than the dinosaurs and are the ultimate survivors that have lived the 5 mass extinction on the planet – that’s incredible!

However, the fossil record of sharks is fragmentary because the cartilage is not preserved so well but we have a very good knowledge about their historic records and their arrival on the land. Talking about the best type that represents the prehistoric appearance of sharks, let’s read on about prehistoric sharks and some mind blowing facts about them!

We have listed some of the exceptional ancestors of sharks that undergoes unique adaptation and best demonstrated about how prehistoric sharks look like:

Megalodon – the mega toothed sharks! Without them no list of the prehistoric sharks looks complete – Megalodon are one of the largest prehistoric species of sharks ever lived and were the top predator of the shark kingdom during their era. The historical background of the Megalodon shows that they have lived in the oceans for 23 million to 26 million years.

As they are giant predators, their dietary items include large creatures such as whales, turtles, and seals. The fossilized teeth of Megalodon are about 3 times larger in size than the teeth of the present day sharks – imagine how big the Megalodon sharks were! The fossil records of the shark’s teeth helps the researchers to gain knowledge about their habitat – when they were alive they were found living in all the continents of the world except Antarctica.

Furthermore, the reason for extinction of this fascinating creature is climate change.They prefer warm water but due to change in the atmosphere over a period of time, the water temperature also changed from warm to cold which led to the gradual extermination of the Megalodon sharks.

Helicopian – also known as buzz-saw sharks, the fossil records depicted that they lived for about 290 to 250 million years and have survived one to the nastiest mass extinction – the Great Permian Extinction! Interestingly, when the researchers first invented their fossils, they thought of it as ammonite. The buzz-saw sharks are famous for their spiral shaped teeth, they were also capable of regaining their lost teeth – this ability helps them to live for such a long period of time and are the top predatory animals of the marine ecosystem during their epoch!

Edestus – the scissor tooth sharks lived for about 300 to 320 million years dated back. The size of these prehistoric sharks is almost equal to the size of the present day Great White shark. They have specially designed curved jaws, instead of biting, they first tear the head of the prey then slash the wound and enjoy the yummy meal – the special hunting technique which is the secret of their popularity!

Cladoselache – the scale-less sharks are labeled as true sharks that lived for about 380 million years ago, few species of sharks today possess some of the features of their ancestors – having 7 pairs of gills rather than 5 gills pairs. The prominent feature of these historic sharks is their high speed and their body is without denticles or scales – just a smooth, thin and fragile skin – making them quite fascinating but odd too!

Stethacanthus – they are the small sharks that look like rats, they lived for360 to 340 million years back. The dorsal fins of these species make them noticeable prehistoric shark species. The flattened anvil shaped fins with enlarged denticles are only present on the male sharks which helps them in mating season.

Ptychodus – this species of sharks are known to live 100 to 85 million years back, they have powerful jaws which helps them to crush the hard shells of the prey – this feature is adapted by the sharks of the present day such as the whale sharks. The Ptychodus can have an average length of 33 feet and is one of the largest known sharks among all the prehistoric sharks.

Xenacanthus – these are the ancient sharks or the freshwater ecosystem that faced extinction about 202 million years ago and are reported as the oldest known sharks. The name indicates that they have eel like body which helps them to roam around in the ocean water without any fear – they are perceptible species because they prefer to thrive in the freshwaters whereas most of the shark’s species inhibit living in the freshwater habitat

Another prominent feature is the presence of ribbon like fins and sharp spine which contain venom which provides them protection from the large predators or enemies. The v shaped teeth aid in crushing the prey such as small fishes and crustaceans.

Cretoxyrhina – these species of sharks are the ancient marine creatures that thrived in the water for 100 to 75 million years back. They were known as ultimate predators because the largest animals of the marine ecosystems are the prey of Ginsu sharks such as turtles, or sharks – the legendary lifestyle!

Quite a unique name “Ginsu”! The reason for this uniqueness is that they were blessed with 490 sharp teeth and each will grow the length of 7 cm with a thick coating of enamels to keep them sharp like razor – unbelievable! The apex predator of this era!

Acanthodian – the spiny sharks are the alternation between sharks and bony fishes just like the Tuna fishes or modern days. The history of spiny fishes depicted that they lived 400 to 360 million years ago. It is interesting to know that the Acanthodia are the first animals that bear jaws. The skeleton of spiny sharks are made up of cartilage, the fins are reinforced spines – the same features are found in the ray finned sharks of the present day!

They are filter feeders, they usually grow to a size of 30 cm or more which entitled them as the largest filter feeding creatures of their time.

Microcephalus – it is reported that some species of Greenland sharks are still living today in the ocean water. They are known as the longest living vertebrate species with a life expectancy of more than 400 million years. The reason for their successful lifestyle is the slow metabolic rate which makes them highly toxic which is why humans avoid to encounter them. Greenland sharks have an average speed of 2.6 km/h but the dietary item includes the fast creatures of the oceans such as seals. Reindeer, polar bear and whale carcasses.

The fossil records of sharks depict that they continue to change and evolve with the passage of time. The sharks are the oldest known creatures on the Earth that have lived 5 massive extinctions. Furthermore it also focuses on their mysterious features and adaptations. The shark’s species of the prehistoric times are much more diverse as compared to the modern day sharks.