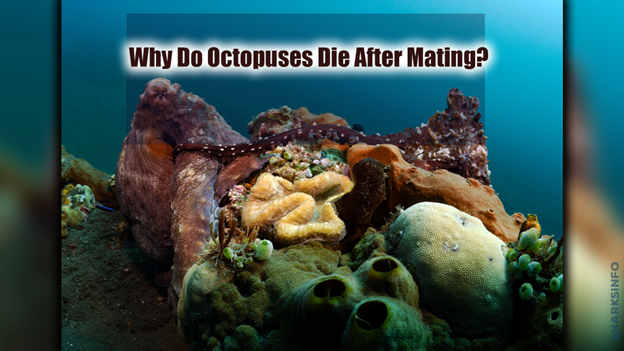 Octopus is a short-lived animal with a life span of a minimum of six months and a maximum of 4 to 5 years. The last thing they do before dying is to reproduce because they belong to the semelparous group of animals, which means they breed and die. Death is inevitable for a male octopus right after mating, while a female octopus survives till the hatching of its younglings.

Scientists have finally unraveled the reason behind their self-destructive death just after the critical process of mating. There is a range of physiological deviations that take place in an octopus after mating and reproducing. To know these changes and the signs that unveil the anticipation of near death, keep reading this piece of info to the last, and the tangled mysteries will be untangled in your mind.

What are the changes that cause the death of octopuses?

The gruesome approach to torturing themselves and starving to death is the prime indicator that indicates an octopus is near its end. All these things occur because of the chemical changes that octopuses have to confront after mating. There is a possibility of 3 different shifts of chemical changes, which are going to be mentioned later in this article.

1: The first chemical change is the increased level of pregnenolone and progesterone hormones. These are the reproductive hormones that play important roles in the development of an embryo. The rise in these hormones can be one of the causes of the death of octopuses after mating.

2: The second shift of chemical change is the rising level of 7-dehydrocholesterol or 7-DHC. This complex compound is the building block of cholesterol found in humans as well. 7-DHC is a toxic compound that must be excreted out of the body. Accumulation of this toxic substance can be another reason for torturing octopuses.

What is the self-destructive system in octopuses?

The optic gland present near the eyes is the self-destructive mechanism in octopuses. It resembles the pituitary gland present in humans physically as well as physiologically. It is responsible for the sex development of octopuses and aging in cephalopods.

When an octopus is near its death, the higher activities of optic glands happen, which ultimately leads to increased levels of sex hormones and insulin-like hormones, and cholesterol metabolism.

After mating, the optic gland of an octopus conceals high levels of these hormones. The uncontrolled secretion or even accumulation of all of these hormones will then stimulate the signaling system that further triggers the death in octopuses.

What are the elements that indicate octopus senescence?

Senescence is the gradual deterioration of cells and organs of an organism that disturbs the mechanism of life and eventually leads to death. The octopus enters into senescence right after it is done with mating. Through these signs, every marine biologist can indicate that an octopus is not so far away from death.

The sacrifice that female octopuses pay

The octopus is among the most captivating creatures of the marine world that lets its admirers enjoy its interesting facts. They could be able to rule the marine world if they could live a long life. Being a member of the semelparous group, octopuses mate and lay down on their death bed immediately. Octopuses have to go through a very torturous phase before dying, in which they torture and starve themselves to death. All of this occurs because of the chemical and physiological changes they have to face after mating, and the stimulation of their self-destructive system or the stimulation of optic glands triggers the death of octopuses.