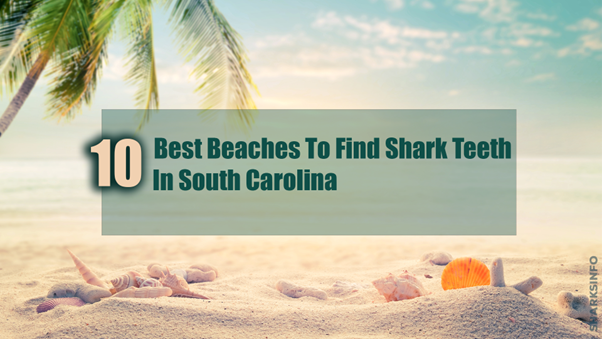 The 10 Best Beaches To Find Shark Teeth In South Carolina

In South Carolina, a number of beautiful beaches attract shark lovers where they can hunt shark teeth. A list of 10 beaches where you can find the shark tooth for sure:

Edisto Beach is not very large but one can find shark teeth here. Dig the sand, look behind the rock piles, or close shell beds; you can hunt many teeth in a short period. This beach is the best place for kids to have fun while hunting the sharks’ teeth – looks like playing hide and seek.

Morris Island is another location to hunt shark teeth in South Carolina. People use a boat to reach Morris Island. There are many teeth of sharks on this Island. Moreover, many of the fossilized teeth can also be collected from this beach.

One of the best spots to hunt shark teeth in South Carolina is Pawleys Island. Try to hunt the teeth close to the inlet because there are plenty of teeth with a high variety available. Tough on the Southern coast of the Island, there are very rare chances for you to hunt a tooth.

Folly Beach is an area of South Carolina where you can hunt the shark’s teeth without much effort. Surprisingly, the size of teeth collected from this beach is quite larger than those collected from the other beaches. This depicted that the beach is a picnic spot for many giant species of sharks.

Cherry Grove Beach is a well-known beach in South Carolina. According to the data reported, there are more than 400 species of sharks that live under the water. Some of the popular sharks such as Bull sharks, Tiger sharks, and Lemon sharks have been collected from an area. Interestingly, the researchers have collected the rare Megalodon shark’s teeth from the beach as well.

There is a large number of sharks seen in the Kiawah waters which is why there is a high chance you can hunt the shark’s teeth. The best time is after the storm when the sand is shifted and a large number of fossilized teeth shine on the surface.

Myrtle Beach is the most famous picnic place for families in South Carolina. Moreover, it is also a visiting point for many sharks. The best time to hunt the sharks’ teeth is early in the morning or after the high tides, probably one can find them around the fragments or shell beds.

The best time to hunt the shark’s teeth is early in the morning after the strong tidal waves settle down. The morning time avoids the hustle of visitors as well as brings the shark teeth near the shoreline.

Another South Carolina beach is Burke’s Beach where you can also hunt the shark teeth buried in the dunes. Now it’s your luck whether you find freshly fallen teeth or fossilized teeth.

The Island has many non-commercialized beaches which is why it gets extremely busy in the summer usually in June and July. But interestingly, you can still see the sharks and can find their teeth in the sand throughout the year whenever you visit the beaches of Sullivan’s Island.

South Carolina is a state in the Southern Eastern region, located on the Atlantic Ocean. South Carolina attract tourist because of its breathtaking scenery and beautiful beaches. Not only this, but these beaches are also the common destination point for many of the shark species. For shark lovers, the beaches of South Carolina are the best places to hunt the shark’s teeth. Now it’s your luck, whether you find the freshly fallen teeth or the fossilized ones.