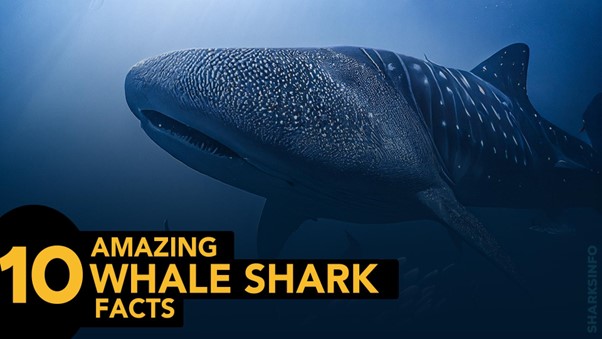 Whale sharks are always loved by swimmers due to the striking pattern on their skin and their gentle nature. Snorkelers enjoy swimming along them without any fear. But there is a still lot that is still not known about this specie. Let us tell you some of the amazing facts about whale sharks, which you might’ve never heard before.

Whale sharks are the world’s largest sharks, ranging as much as 20m in length, as well as the largest living fish. They feed on plankton and must travel considerable distances to obtain enough food to sustain their gigantic size and reproduction. Whale sharks can be found in all tropical waters throughout the world. These gentle giants are distinguished by their white spotted coloring, which makes them appealing to snorkelers and divers in areas where they congregate off the coast.

1: Not whales, but sharks

Although these massive sea creatures are termed ‘whale sharks’, they are not actually whales, but filter-feeding sharks frequently referred to as “gentle giants”. They are also the world’s largest fish, reaching lengths of up to 12 meters.

Whale sharks have unique filtering machinery inside their jaws that allow them to deal with a wide range of prey. They can strain out the smallest plankton using their gill rakers, which they develop by ram feeding—swimming through plankton-rich water with their mouths open.

3: Females give birth to young ones

According to extensive studies, it has been established that ovoviviparity is followed by this species. Whale sharks hatch from eggs retained within their mother’s body. Following that, the little fish emerges fully grown from her womb.

Whale sharks are slow swimmers when compared to other sharks, with a top speed of 3mph, which is just slightly quicker than that of a tortoise, which has a top speed of 63mph.

5: Have the biggest eggs

The eggs of an ostrich are the largest of any terrestrial mammal, reaching 6 inches long and 5 inches wide. The eggs of a whale shark are nearly twice as large.

Most sharks have 20 to 30 rows of pearly whites, whereas whale sharks have over 300 rows. Each tooth on a whale shark is about the size of a matchhead.

7: Dermal denticles on their skin

All sharks are coated in tiny, tooth-like structures called dermal denticles, which act as an armor and reduce drag by forming tiny vortices in the water. Whale sharks have generated specialized denticles to shield their eyeballs on top of a full complement of dermal denticles on their skin.

Because whale sharks lack eyelids, this extraordinary adaption is supposed to provide extra physical protection for the eye and aid in retracting it into its socket.

The exquisite patterning of dots on their skin, like a human fingerprint, is unique to each individual. Researchers can follow individual sharks by photographing and documenting their sightings.

10: They are under threat of extinction

Many whale sharks are caught in fishing gear by accident or on purpose for their fins, which are a delicacy in Asia. Their maritime habitat is also in jeopardy. Climate change is warming the ocean, impacting habitats, prey, and shark population fluctuations, as well as plastic waste, which can cause entanglement or be consumed, particularly by filter feeders.

Whale sharks are one of the friendliest and most peaceful shark species, are filter-feeders, give birth to young ones, and have dermal denticles on their skin. They are under threat due to certain human activities, which need to be stopped, or else, we won’t be able to swim with these shark species, ever again.