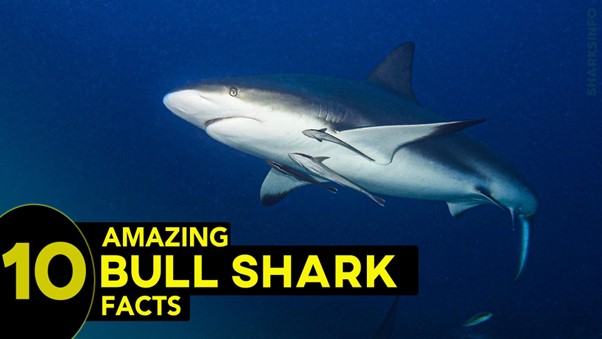 Bull sharks are one of the giant sharks present in the ocean. People do look at their physical appearance for their identification, but there are lots of interesting facts associated with them, that one should be aware of. Let’s learn more about bull sharks.

Bull sharks are quite distinct from other sharks due to their enormous width-to-length ratio, which gives them a powerful appearance. Bull sharks, like much other fish, have countershading, or black on top and bright on the underbelly. This helps the critters blend in with their surrounding.

From above, the animal’s dark back blends with the murky water below. However, from below, its white belly blends in with the brilliant seas above. Male bull sharks can grow to be seven feet (2.1 meters) long, while females can grow to be 11 feet (3.3 meters) or more. An average adult weighs between 200 and 500 pounds.

1: Can survive in both freshwater and saltwater

While most sharks are restricted to marine environments, bull sharks may live and reproduce in both freshwater and saltwater. That’s because these sharks are able to modify the salt-to-water ratio in their bodies as per the water present in their surrounding environment, a process known as osmoregulation. They retain salt and create more diluted pee while in freshwater, then begin to make saltier urine again when they return to the ocean, thanks to specific excretory system modifications.

2: They have a large number of teeth

Bull sharks not only have extremely powerful bites, but they also have far more teeth than the normal shark. Most sharks have 5-15 rows of teeth, but the bull shark has 50 rows, each with 7 teeth, for a total of 350+ teeth at any given moment (shark teeth fall out frequently).

Female bull sharks migrate to freshwater habitats to give birth to their young, which develop in separate yolk sacs within their bodies. These are fully formed and alive when they are born. Young ones are born in groups of up to 12 and with their tails first. After birth, they are left to fend for themselves.

Hippos are far too large for these aggressive fish. Adult hippos’ skin is likewise too thick for a bull shark to cause serious harm. Bull sharks typically attack juveniles before being repelled by the remainder of the herd.

5: Females are heavier than males

6: Live all over the world

They can be found in America from Central America’s Pacific coast all the way down to Peru in the south. Bull sharks can also be found in the Gulf of Mexico and along the United States Atlantic Seaboard, as well as along South America’s whole Atlantic coast north of Argentina.

They can also be easily found in most of Africa’s coastal areas. However, they are particularly common in the South East Asian region as well as Oceania. Bull shark enclaves can also be found off the southwest coast of India, as well as in portions of China and in some oceanic areas of the Persian Gulf.

7: They have quite an appetite

Bull sharks eat bony fish as well as other bull sharks. Stingrays, turtles, seagulls, and dolphins are among their prey. They have also been observed eating crustaceans and echinoderms including but not limited to crabs, shrimp, starfish, and sea urchins.

Humans, very regrettably, are the bull shark’s principal predator. The fins of these robust, pale-bellied sharks have been sought after. This is most frequent in Asia, where they are used to make the infamous and the yummiest shark fin soup. The fin serves no use in terms of flavor. Rather, the cartilage from the fin is removed and dried. It absorbs flavor when it rehydrates in the soup. While the dish is popular, it may jeopardize the bull shark’s long-term survival.

Bull sharks have the unusual ability to modify the rate at which they digest food… which comes in handy for survival! When there isn’t enough food in the ecosystem, sharks digest more slowly and require less food. They may also generate food on demand to confuse predators.

Bull sharks are huge in size with black outside and whitish underside of the body. They have diverse appetites and use digestion to distract predators. They have quite sharp teeth to enjoy the prey and evade attacks. They are truly special creatures of the ocean, whose conservation is necessary by limiting human activities.