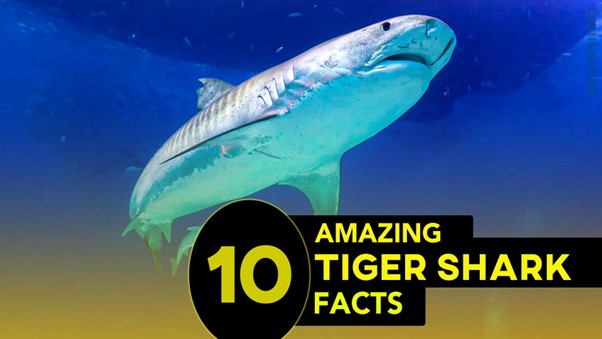 Tiger sharks are one of the most notorious predators of the ocean and are also responsible for most human attacks as well. Tiger sharks are also known as Leopard sharks because the pattern of stripes, which are placed vertically, resembles the patterns on the leopard’s body. Let’s find out more about these sharks.

The tiger shark is a type of requiem shark, which is one of the most feared predators with strong jaws and razor-like sharp teeth. After the great white shark, it is the second largest predatory shark, measuring over 16ft in length and weighing 2,000 lbs.

It can be found all over the world in warm-water marine settings, mainly on central Pacific islands, mostly between 45 degrees North and 32 degrees South. Seasonal warm currents such as the Gulf Stream may account for sporadic sightings in cooler temperate zones.

Here are some amazing facts about tiger sharks.

This is because of lethal attacks on humans. The appellation is misleading, however, because tiger shark attacks are rare, and drowning in coastal waters kills more people. The tiger shark ranks second in terms of recorded human bites, with 36 fatal bites recorded in total. In Hawaii, there are typically 3-4 shark attacks each year, which are rarely fatal.

Tiger sharks consume a diverse range of foods, including albatrosses, venomous sea snakes, and other sharks, as well as man-made items such as paint cans, leather coats, rubber tires, and even license plates.

3: The Dark Stripes Fade As Tiger Sharks Get Mature

The young ones of the tiger shark only have distinguishing dark lines and spots, which provide them better camouflage in the ocean water. As they grow older, the black stripes vanish and the skin turns a dark blue-green or grey color on top and a whitish underbelly.

4: Capable Of Detecting The Electric Fields Of Prey

Tiger sharks, like many of their aquatic relatives, have small holes on their snout that house a network of sensory organs known as ampullae of Lorenzini. These sense electric fields, including prey’s feeble impulses.

5: Consume A Variety Of Food

Tiger shark feeds on a wide variety of food including stingrays, dolphins, squids, sea birds, seals, turtles, crabs, and even some other sharks as well. It sometimes also feeds on some terrestrial animals such as cats, horses, sheep, goats, dogs, and rats.

All tiger shark’s teeth feature incredibly sharp saw-like serrations with prominent sideways-pointing tips. They use their sharp teeth to pierce their prey and these teeth keep on shedding and growing again throughout their life.

7: Female Counterpart Is Larger Than Male

This is referred to as dimorphism. Females of exceptional size can grow to be more than 5m long and 900kg in weight. A huge male can reach a length of 4m.

Every year, several sea turtles visit Raine Island, and tiger sharks, which prey on the turtles, are not far behind. Turtles try to evade the tiger sharks by changing their swimming position but tiger sharks consume them anyways.

A female tiger shark, after mating, deposits around 10 to 82 fertilized eggs inside her body, each of which contains an embryo that keeps on feeding on its own egg yolk. The embryo then hatches and grows inside the body of the mother until the mother gives birth to fully developed young ones after a gestation period of 13 to 16 months.

10: Tiger Sharks’ Population Is Under Threat By Human Activities

Humans are diminishing the tiger shark population by slaughtering them for their fins, delicious flesh, and vitamin A-rich liver oil, which is used to produce supplements. Its tough skin was once used to manufacture leather, which is still used to make traditional Hawaiian drums. It’s also hunted for fun.

Tiger sharks are one of the apex predators of the ocean with sharp teeth and an ovoviviparous mode of reproduction. They eat everything and prefer warm waters to reside in the ocean. Even though tiger sharks are scary species, human activities are causing a decline in their number.