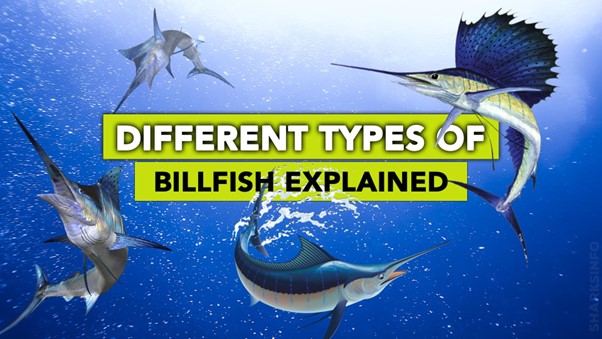 Billfishes are well-known top predators that prey on a range of smaller fish and cephalopods. Young billfish also serve as food for sharks and other predators in the marine food chain. Billfishes are coveted by humans as both food and game fish, due to their great size and powerful fight, which includes acrobat leaps out of the water. Let’s find out how many types of billfish are there.

There is a total of four types of billfish.

The swordfish is a fast and powerful predator in the open ocean, as well as a significant fishery species wherever it lives. The swordfish is one of the largest bony fish species, with weights of up to 1400 pounds (650 kg) and lengths of up to 15 feet (4.5 m).

This species gets its common name from the long, sword-like bill that grows from the front of its head. Swordfish stun their prey by cutting their heads side to side, knocking them unconscious and making them easier to catch.

With an elongated body and a spear-like bill resembling a sailor’s marlinspike, the marlin is the largest of the billfish. It is home to approximately 10 distinct species, the most known being the Atlantic blue marlin.

The blue marlin looks like a swordfish or a sailfish, yet it is the largest and strongest apex predator in the oceans, with only killer whales and sharks as predators. In addition, the blue marlin is a popular game fish all across the world.

Female blue marlins can weigh up to 1985 pounds and grow up to 180 inches in the tropical and temperate seas of the Atlantic.

Spearfish are open ocean pelagic fish that have a thin, lightweight look with a dark blue, clean dorsal fin. Spearfish can grow as much as 100 inches long and usually weighs up to 115 pounds. The majority of species, on the other hand, have average weights and lengths of 50-75 inches and 20-60 pounds. Spearfish are classified into four types: long bill, short bill, Mediterranean, and round scale.

Sailfish are a species of billfish (similar to blue marlin and swordfish) known for their massive dorsal fins that can be longer than their bodies. 1 Sailfish start off as little larvae, barely a few millimeters long, but they grow quickly during their first year.

They can grow from 0.125 inches (0.3 cm) at birth to 10 feet (3 m) from bill to tail as adults and weigh up to 220 pounds (100 kg). 2 Female sailfish, like other billfish, can grow to be larger than males in order to carry more eggs and have a higher chance of breeding in the open ocean.

There are four types of billfish swordfish, spearfish, sailfish, and marlins which are there in the oceans with their remarkable long bills. They are apex predators which feed on a variety of food items and are often mistaken for each other because of their striking resemblance to each other.