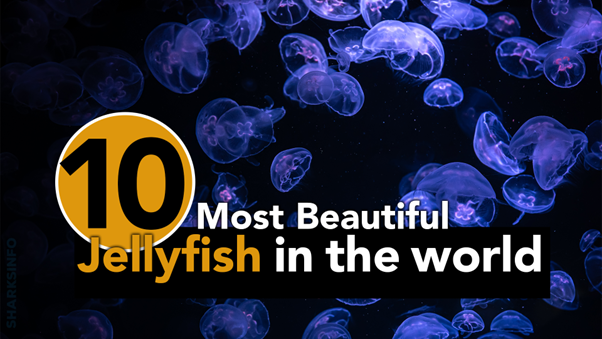 Jellyfish are marine invertebrates that are pleasant to the eyes and are adored by humans. There are almost 200 known species of jellyfish among which some are the tiniest, some are venomous, and some are the prettiest. Here, we are going to let you in on the information about the world’s top most beautiful jellyfish. Let’s begin.

10 Most Beautiful Jellyfish in the world

Here is all about the world’s most beautiful and eye-catching jellyfish.

The white-spotted jellyfish can be spotted in its native areas from Australia to Japan. But due to its invasive nature, it could be seen in some other coastal areas around the world as well. This beautiful jellyfish is a treat to the eyes due to its equally spaced spots on the semi-transparent bell. They undergo two stages in their lifecycle i.e., polyp and medusa.

Although white-spotted jellyfish are pretty to look at, they do sting humans which can cause mild pain but is treatable.

The moon jelly goes by saucer jelly as well due to its physical similarities with a flying saucer. It is found thriving in warm tropical and coastal waters. Moon jellies prefer saltwater habitats but are also found in brackish waters as well. They have umbrella-shaped transparent bodies with four distinctive gonads. From their bells, tentacles arise that can reach upto 1-5 cm long.

Moon jellyfish also have the ability to sting humans but fortunately, their sting is not poisonous and just causes mild pain or irritation for a few hours.

The lion’s mane jellyfish is the largest known jellyfish in the world that can be found in cold waters. It is commonly found residing in the coastal waters of Southern California, Eastern Canada, and the Pacific Northwest. Their round bells are translucent from which several tentacles originate, resembling the hair of lions, thus the name. Though transparent, their bodies do get some yellow, dark red, or pink hues.

The cannonball jellyfish is native to the coastal waters of the Pacific Ocean and from North America to Brazil and is also known as the Cabbagehead jellyfish. They have dome-shaped bells from which 16 short oral arms originate. The coloration of bell differ in some regions like in the Gulf and Atlantic waters, their bell gives a milky appearance due to brown pigmentation.

The cannonball jellyfish shall be kept at a safe distance as they sting humans causing myocardial problems in humans.

The crystal jellyfish is not only famous for its beautiful appearance but is also known for being the source of bioluminescent proteins. It is found around the coastal waters of North America but is also harvested at large for biological and neurological experiments. As the name indicates, their bodies are transparent like crystals and they have delicate tentacles. They have quite a flexible mouth, when opened, can extend to the bell margin.

The tentacles of crystal jellyfish are covered with nematocysts but pose no threat to humans.

The bloodybelly comb jellyfish are ctenophores and are residents of the deep sea. They have blood-red colored stomachs which help them blend in the deep sea and avoid potential predators. However, certain prey that they consume can light up their bellies, alerting predators nearby, and risking their lives.

The bloodybelly comb jelly has iridescent cilia that produce sparkling light during locomotion.

The blue button is one of the prettiest marine organisms resembling jellyfish but is not a true jellyfish. It is found in all the major world oceans and sometimes in the Mediterranean Sea as well. The bodies of the blue button are made up of a blue float, a golden-colored circular disc, and several gas-filled tubes which help them float on the surface of the water.

Blue button jellyfish are safe to touch as their sting is not harmful but only causes slight irritation on the human’s skin.

The Atolla jellyfish are also the deep sea specie with bioluminescent abilities. They are found all over the globe. Their bodies are bell-shaped with deep red coloration and have large tentacles which facilitate capturing prey. Their bodies look like transparent crowns due to the deep groove running through their bells.

It is fun to know that they are also called “alarm jellyfish” because when they are surrounded by certain attackers, they launch flashes in the ocean which alert other predators nearby. They do so to draw predators towards those attackers and keep themselves safe.

The jelly blubber is also known as blue blubber jellyfish and is native to the coastal waters of the Indo-Pacific region. These jellyfish have large bells whose color varies depending upon the kind of algal plant cells kept in their bodies. They can be brown, blue, or creamy white in color making them one of the prettiest jellyfish. They lack mouths but use their tentacles to consume tiny plankton.

The cauliflower jellyfish got its name because of wart-like projections arising from its bell-shaped body. It is native to East Atlantic and the Indo-Pacific oceans but can be found all over the world as well. They have a bluish-purplish-colored crown-shaped bell from which around eight tentacles arise. Their appearance makes them easy to spot in the oceans and they are one of the most beautiful jellyfish to look at.

The cauliflower jellyfish is one of the highly venomous jellyfish, however, their sting is not deadly for humans but affects marine animals only.

Some of the most beautiful jellyfish are moon jellyfish, white-spotted jellyfish, cannonball jellyfish, crystal jellyfish, and cauliflower jellyfish. These species are pleasant to look at but you should watch out for the ones whose sting can harm humans. By keeping a safe distance from those jellyfish, you can enjoy the spectacular view of their movements in the ocean.