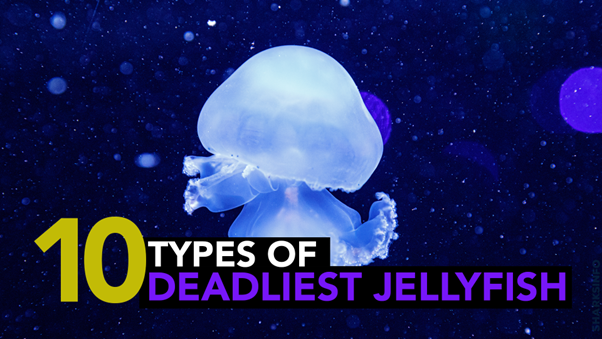 Among 200 known types of jellyfish, some are the deadliest jellyfish which are famous for their venomous stings. Some are hard to locate in the oceanic waters due to their transparent appearance, but others are easy to spot. Let us tell you all about the top 10 types of dangerous and deadliest jellyfish that you should always keep a safe distance from.

Following are some of the most dangerous jellyfish in the world, whose sting can cause infections or even death of humans.

The box jellyfish, also known as Cubozoa, marine stingers, and sea wasps is the deadliest jellyfish in the world, that’s why it is number one on this list. It is native to Northern Australia’s coastal waters and is also present all over the Indo-Pacific Ocean. Box jellyfish, as the name indicates, has a cube-shaped transparent body with a pale blue hue. From each corner of the cube, long and hollow tentacles arise.

The tentacles of box jellyfish are covered in nematocysts that shot poison into the human body upon physical contact. People subjected to their sting, unfortunately, have to experience cardiac arrest, paralysis, and even death, that too under a few minutes. However, the venom of all species of box jellyfish is not lethal, but of some only.

The Irukandji jellyfish is a highly venomous jellyfish with 16 known species, among which Carukia barnesi is commonly known. It is widely present in the northern waters of Australia, and its population has been increasing around Great Palm Island. The Irukandji has a small transparent body and four tentacles arising from it.

The sting of Irukandji is highly venomous to humans as it is considered 100 times stronger than the venom of a Cobra. Both, their bell and tentacles are filled with stings which they project toward their prey and humans to deliver poison. Their sting results in causing severe muscle pain, hypertension, cardiac complications, and brain hemorrhage leading to a person’s painful death.

The Chiropsalmus quadrigatus, also known as the four-handed box jellyfish is a native of the Gulf of Mexico, the Atlantic Ocean, and the Pacific Ocean. It is a specie of box jellyfish, thus it also has a transparent cube-shaped bell. The 4 corners of cubes further project into tentacles containing stinging cells on them.

The sting of Chiropsalmus is venomous to humans and has been causing several deaths every year across the globe. Their sting makes people experience numbness, muscular cramps, shock, breathing difficulty, nausea, loss of speech, delirium, and paralysis, eventually leading to death.

The Portuguese Man o’ War, also known as Physalia physalis belongs to the class of Hydrozoa and is native to the Indian and Atlantic Oceans. It resembles the Portuguese warship from the 18th century having a balloon-like floating bell with violet, blue, or pink coloration. Surprisingly, it has very long tentacles which it uses both for locomotion and defense purposes.

The Portuguese Man o’ War uses their venom-filled nematocysts to attack humans which does not result in the death of humans but does cause excruciating pain, burning sensation, and redness in the stung area. In some cases, the stung area develops blisters and lesions which can be treated with medicines.

The Cannonball jellyfish, also known as Stomolophus meleagris, is native to the oceans of southeastern America to Brazil. Their bodies are of cannonball shape with rounded bells filled with brown pigment and have clusters of oral arms attached to them.

Though Cannonball jellyfish are placed as one of the most dangerous jellyfish, they do not sting humans. It is just in those cases when humans unintentionally come in contact with or consume their toxin which can cause cardiac issues in humans.

The lion’s mane jellyfish is the largest jellyfish in terms of size, also known as Cyanea capillata enjoys cold waters and is thus found near the coasts of Eastern Canada, the Pacific Northwest, and Southern California. Its body is translucent with yellow or dark red hues, with a round bell having several tentacles originating from it.

The lion’s mane jellyfish are widely known for their stinging abilities. They use their tentacles to cause burning sensation, pain, and even allergic reactions in humans. Their stings can be treated with basic first aid but in case of severe reactions, medical assistance can be sought.

The moon jellyfish, also known as Aurelia aurita is native to the coastlines, estuaries, and harbors of the Atlantic, Indian, and Pacific oceans. They have transparent bodies with an umbrella-shaped bell, horseshoe-shaped four gonads, and hundreds of short tentacles.

The moon jellyfish brushes its short tentacles against humans, which cause a mild reaction resulting in a minor stinging sensation. Their sting is not poisonous but painful, thus they are also one of the most dangerous jellyfish.

The Morbakka fenneri, one of the smallest jellyfish also known as the fire jelly or Moreton Bay stinger is an inhabitant of the oceanic waters of Thailand and Australia. It is only 4 inches long with a transparent bell and four mauve-colored ribbon-like tentacles.

It is a specie of box jellyfish thus it also exhibits potent danger toward humans. The sting of Morbakka is known to cause Irukandji syndrome which leads to a burning sensation in the wound area, severe pain in the lower back of the body, vomiting, breathing difficulty, and dizziness. All these symptoms need to be treated by seeking immediate medical help, or it could be life-threatening for some.

The sea nettle, also known as Chrysaora fuscescens is found living in shallow bays and harbors in the coastal waters of the Atlantic coast of the US. Their bell of yellow or reddish-brown color and long dark brown or maroon colored tentacles hanging from it give them a unique appearance. These tentacles are anchor-point for nematocysts, which are filled with toxins.

It stings its predators or even humans by releasing toxins present in its nematocysts. It has been placed on the list of dangerous jellyfish because its sting can be really irritating and painful. However, the good part is that its sting is non-fatal.

The purple jellyfish, also known as Pelagia noctiluca inhabits the open waters and are believed to be found near the continental shelf. They reach upto the size of 3 feet,  have bowl-shaped bells, and have eight spiraled tentacles hanging from them. The bell is covered with purple stripes, thus they are also known as a mauve stinger, purple-striped jelly, and purple stinger.

The purple-striped jellyfish is classified as a toxic jellyfish. However, its sting is not poisonous but is painful enough to take painkillers or seek medical help to get rid of the symptoms.

Some of the deadliest jellyfish are box jellyfish, Irukandji jellyfish, Portuguese man o’ war, lion’s mane jellyfish, and cannonball jellyfish. It is advisable to always look out for these species of jellyfish and avoid their sting at any cost to save your life. Never get distracted by their beautiful appearance, but always take precautionary measures if you ever come in contact with them. If you get stung by any of them, seek medical assistance immediately.