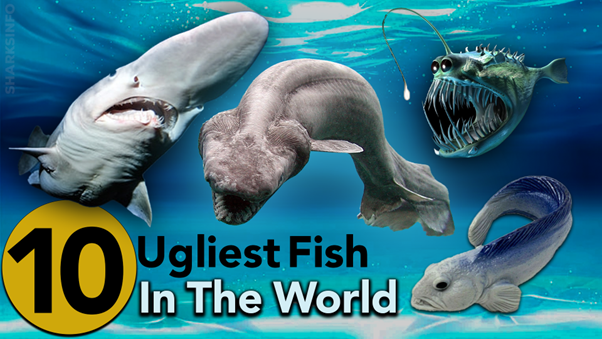 Fish are always adored for their color patterns and shapes but there are some fish in the ocean that are plain ugly and hard to look at. They either give very scary appearances or make their visitors uncomfortable due to their physical features. Ever met some? Well, here are some of the ugliest fish in the world that you might encounter.

10 Ugliest Fish In The World

Though these fish are not so good-looking, do keep in mind that they are an important part of our ecosystem, and their perseverance is as much important as other fish.

Though cartilaginous, sharks are fish. And among them, one of the weird-looking sharks is the goblin shark. It lives in the depths of the ocean that’s why it is rare to spot them. They have an extremely long snout, extending from their mouth, and have sharp teeth. Their pink and odd-shaped bodies resemble the goblins mentioned in the folklore of Japan, thus the name. Even with their intimidating appearance, these sharks do not pose any threat to humans.

A living fossil- The frilled shark, is a pre-historic shark that has been believed to go extinct, but recently, a specie of Frilled shark has been spotted in the rivers of Japan. They lurk in the depths of the Pacific and Atlantic oceans.

Their bodies are elongated with broad heads and short snouts. The dorsal side of their bodies is dark brown or gray in color while the ventral side is a bit lighter in shade. Their name comes from the gill slits which form a sort of frilled collar under their jaws.

A frilled shark uses its vast jaws to capture its prey and devour it in seconds, as a whole. As they prefer deep waters, they are not a threat to humans.

A blobfish is a tadpole-shaped fish having soft bones and few muscles only, giving it a bulbous appearance. It lives in the depth of the oceans and is endangered due to human activities. It has adapted its body to easily float in the deep waters without putting too much effort.

As it lives in high-pressure environments, its gelatinous body helps it survive such conditions and save it from getting crushed. The blobfish has large jaws, feathery pectoral fins, loose and flabby skin, and tapered tails. All in all, these features have made people poll blobfish as the ugliest fish in the world.

With prominent teeth projecting out of its mouth, the atlantic wolffish is a voracious predator and its odd-shaped tapered body makes it to the list of ugliest fish in the world. They are residents of the cold waters of the Atlantic coast of North America.

Other than their disorganized and large teeth, other physical features include blue-greyish body coloration with the ventral side of the body being light in color. Their bodies are covered with dark patches which give them a scary look.

Though not so pretty, these fish are remarkable as they produce antifreeze proteins that keep their body fluid running even in cold waters.

A bottom-dwelling sea creature, the Monkfish, lives in the Northwest Atlantic Ocean. These ugly creatures have mottled skin, fang-like teeth, a very big head, and mouths with very small eyes. They are also named sea devils, goosefish, or fishing frogs.

Their mottled skin is brown to olive green in color, giving them a tadpole-like appearance, and have flattened bodies. They prefer to walk on the ocean floor instead of swimming and have camouflaging abilities which let them merge with the surrounding environment to avoid predators.

Though they have unattractive appearances, they are tasty sea creatures and thus widely consumed by people around the globe.

Preferring depths of the ocean, where there is no sunlight at all, the Angler fish prefer the ocean having murky waters and are found commonly in the Antarctic and the Atlantic Oceans.

Angler fish have dark brown colored bodies, giant crescent-shaped mouths with sharp teeth, and huge heads. They use the fleshy part of their dorsal fin which comes straight in front of their face and lights up to attract the prey. This habit has assigned them a name, Angler fish. Undoubtedly, their appearance makes them one of the ugliest fish in the world.

The interaction between humans and angler fish is rare, so there are very slim chances that they could pose danger to humans.

Holding the world record for having the largest teeth relative to the head size, Sloane’s viperfish is an ugly and scary-looking fish. Though they are deep-water fish, they do swim in the shallow waters at night to enjoy plenty of food. They are widespread in the Mediterranean Sea and the Atlantic Ocean.

The Sloane’s viperfish is a small fish with a dark silver-colored body, however, sometimes the coloration of the body does vary from green to black. They have a prominent big mouth, disoriented teeth, and a large dorsal fin ray.

Their interesting feature is that Sloane’s viperfish produce light via their photophores to lure their prey.

Like an eel in appearance, hagfish are bottom dwellers, found in the waters of the coasts of the Pacific ocean. They haven’t evolved much and still resemble their ancestors from 300 million years ago. They do have skulls but lack vertebral column and their body is made of cartilage.

They have been placed on the list of ugliest fish because of their alien-like mouth, paddle-shaped tail, and sinuous body, giving a horrific appearance. They lack teeth and have disgusting eating habits. They produce liters of slime from their mouth, which help them escape from predators.

With a startling red pout, a mustache, and a beard, the red-lipped batfish surely grabs a spot on the list of ugliest fish in the world. They live at the depths of the ocean and are found near the waters of the Galapagos Islands.

The body of red-lipped batfish is grey and brown on its back and the lower part of the body is white in color. Both snout and horn are of brown color and have a dark brown stripe going from head to tail. As their name suggests, they have prominent red lips which somewhat resemble humans, yet make them look odd.

Even with these odd looks, the red-lipped batfish is harmless to humans.

Due to its meanest nature, Whiteman Stargazer is locally known as “Mother-in-law fish”. It is a bottom-dwelling fish found mostly in Indo-Pacific and the Red Sea. They are not only ugly but also pose threat to humans as they have poison spines on their bodies. They are able to camouflage themselves and ambush their predators while hunting them down with their poison and electric shocks.

It is named Whiteman Stargazer because its eyes sit on the top of its head. Their heads are large and they have a respiratory valve located inside their lower jaw. They have cirri on the edge of their mouth, which they use to breathe when buried in the sand.

Some of the ugliest fish in the world are blobfish, hagfish, goblin and frilled shark, red-lipped batfish, anglerfish, monkfish, and atlantic wolffish. These fish are placed on this list due to their repulsive appearance, however, they are an important part of the ecosystem and possess special features which are worth finding out about.