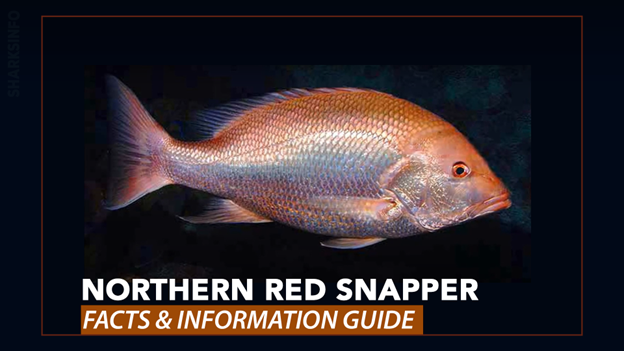 The northern red snapper is a popular game fish that is prized for its delicious taste- it is considered to be among the best-tasting fish in the sea. It is also one of the most beautiful fish in the ocean, with its bright red body and long fins.

Getting familiar with the species first is a great way to enjoy it more once you try it. So, let’s start with the guide.

Red snapper is a desired seafood that is known for its crumbling, white flesh and mild flavor. It is distinguished from other red snapper species by its slightly smaller size and reddish-orange color. Like other red snappers, the northern red snapper is cherished for its subtle flavor and firm texture. Take a closer look at this amazing species.

There is a moderate growth rate for red snappers, and they may grow up to 40 inches and 50 pounds in length.

The Gulf of Mexico and the eastern coasts of North, Central, and Northern South America typically feature red snapper at depths of 30 to 620 feet. Juveniles live over sand and mud bottom habitats in shallow waters, whereas larvae swim freely in the water column.

During their adult lives, they reside on the bottom in areas of sloping soft bottoms and limestone deposits, usually near hard structures on the continental shelf.

It is not uncommon to see large schools of northern red snappers. However, they prefer to attach themselves to fish of the same size.

The majority of the food that northern red snappers consume comes from the ocean bottom, even though they live in reef-like areas. Besides fish and shrimp, they eat crabs, worms, cephalopods, and some plankton as well.

50 years is the average life expectancy for a northern red snapper; however, as old as 57 years have been recorded in the Gulf of Mexico for red snappers.

The female is capable of reproducing as early as 2 years of age. Eggs and sperm are released into the water column during their breeding season, which runs from May to October. Floating eggs hatch into larvae within three days on the water’s surface. The larval stage lasts for four weeks, during which time they grow from two to twelve millimeters in length.

This fish is an important part of the ecosystem and is also a popular food source for humans. The northern red snapper is threatened by overfishing. In addition, habitat loss can occur due to coastal development, pollution, and the destruction of coral reefs, which is also affecting the species’ population.

This fish is an important food source for humans and is also popular in the aquarium trade. The northern red snapper is not currently considered to be endangered or threatened, but overfishing and habitat loss are potential threats to this species in the future, and as per the IUCN, the species is listed as vulnerable.

The northern red snapper is a versatile fish that can be found in many different habitats. It is a popular choice for both recreational and commercial fishermen and is considered to be a good food fish. The species is known to have a high mortality rate, but it is still a popular choice for many fishermen.